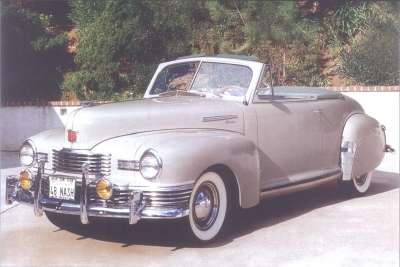 The 1948 Nash line saw the reintroduction of a convertible, along with a return to two trim levels.

The 1947-1948 Nash lineup effected a transition for the company to the first post-war model. For 1947, Nash showed almost no appearance change from the prior year -- the upper grille was a bit broader, but that was about all anyone could notice. Frankly, there still wasn't much need of anything more drastic; this was the second year of the booming postwar sellers' market and the main concern, as in 1946, was simply to build as many cars as possible, since thousands of buyers were waiting. The company managed to produce 115,914 cars for the fiscal year, passing the 100,000 unit mark for the first time since 1929.

Nash was chosen to provide the pace car for the 1947 Indianapolis 500 race. As Nash lacked the convertible model traditionally selected for this role, the field was led by a canary yellow Ambassador sedan with energetic Nash president George Mason, himself an old dirt-track motorcycle racer, at the wheel.

But big changes were the order for Nash and its cars for 1948. The material shortages and work stoppages of the previous two years eased a bit, allowing Mason to broaden the lineup. A gorgeous convertible, the first model of that body type since before the war, was introduced. Ambassadors were now offered in two series, Super and the fancier Custom.

The two-door Brougham coupe and the four-door Slipstream and Trunk sedans came in both series. The Suburban was available only in the Super series, while the droptop came only as a Custom. Of these two most-expensive Nashes, only 130 Suburbans and 1,000 convertibles were built that year.

About the only appearance change to the Ambassador was the deletion of the full-length chrome bodyside strip used on previous models. A short chrome strip now graced each side of the side of the hood, as did Super or Custom script. Sales were good. Fiscal-year production edged up to 119,862, though that included 749 trucks built primarily for export markets. These were the first Nash trucks since the Twenties.

The most popular 1948 Nash style was the fastback four-door sedan, shown here in Custom trim.

An era ended with the 1948 Nash Ambassadors. It was the last time Nash would build a production model with a separate frame, or offer a wood-trimmed car, and it was the last time America would see a Nash Ambassador convertible (though a Rambler Ambassador ragtop would debut in 1965). Charles Nash passed away quietly that year and the chairmanship of the company was placed in Mason's able hands. The company reported outstanding earnings -- a profit of more than $20 million. An all-new type of Nash was waiting in the wings. So, too, for a time was even greater success.