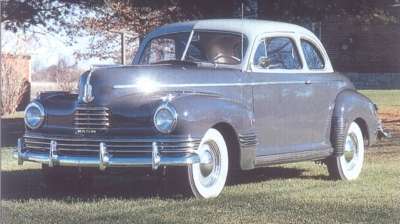 An all-new frontal design was adopted for 1942, as seen on this six-cylinder Brougham coupe.

The 1942 Nash models carried a few alterations. Most of the appearance changes were at the front end. Nash made the new hood and grille blunter than the pointed snout of the prior year. The dual waterfall grilles were gone, replaced by a central grille with five chromed louvers. Just below the louvers, the Nash name was spelled out in large block letters.

Turn signals were now on top of the fenders and the hood had a stylish "N" badge. Three chromed bars, thicker than the five smaller bars on the 1941s, spanned the area just above a new, heftier bumper. All in all, it was a very handsome facelift.

Nash wasn't shy about touting its 1942 models, claiming that "For sheer beauty of form...for magnificent size and room and comfort...and for surging extra power at your toe-tip...no car at anywhere near the low price can match this supreme product of 25 years' fine car building." From Nash's point of view, these cars were "fitting big brothers to the sensational Nash Ambassador 600."

The new models were previewed by Nash distributors and branch managers at a showing in mid August 1941 in Hot Springs, Virginia. According to one press release, the distributors "roared their spontaneous approval when they first glimpsed the clean newness of the 1942 cars."

There was a down note to the introduction: Like the rest of the auto industry, Nash had sharply curtailed production because progressively more of its attention was turned to the production of defense material, and thus dealers wouldn't be receiving as many cars as had been hoped for.

With every possibility indicating that increasing defense needs would further cut into car production, Nash's General Sales Manager, W. A. Blees, cautioned the distributors to make sure each dealer ran a tight ship, with particular emphasis on the service, parts, and used-car departments. In lieu of a sufficient supply of new cars to sell, these departments were likely to become important profit centers.

Japanese forces launched a murderous sneak attack on the American naval base at Pearl Harbor, Hawaii, on December 7, 1941, drawing the U.S. into World War II. Within weeks, all automobile production in America ceased as auto plants were quickly changed over to full war production.

Assemblies of Nash automobiles ceased in January 1942. Only 5,428 Nash cars were built that calendar year, but in all, more than 31,700 1942 models (of all series) were produced before the wartime interruption. These included a significant milestone: the last straight-eight-engine car produced by Nash. The company wouldn't offer another eight-cylinder car of any type until the Packard V-8-powered 1955 models.

For a small independent, Nash's war record was remarkable. The company produced more than $670 million in war goods, including aircraft engines, propellers, bomb fuses, transport trailers, and some of the first helicopters used in wartime. Nash also ran one of the most endearing series of wartime advertisements in the business -- dedicated not to selling cars but in tribute to the brave servicemen "over there."