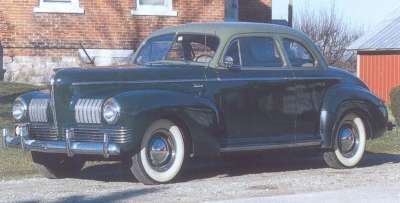 The 1941 Nash Ambassador Six and Eight models were so named for the number of cylinders in their engines. The Six was powered by Nash's dependable seven-main-bearing, 234.8-cubic-inch, 105-horsepower, Twin Ignition Aeropower six-cylinder. Like the Eight, this was an overhead-valve engine, a Nash tradition that perhaps evolved from founder Charlie Nash's former management position at Buick. With full-pressure lubrication, rifle-drilled connecting rods, and four-ring pistons, the six was a strong, quiet powerplant that allowed adequate acceleration coupled with excellent fuel economy.

These sturdy engines were carried in bodies that looked almost identical to those of the smaller 600 series. The big Nash models wore much longer hoods and front fenders because of their longer wheelbases, and had full rear-fender openings, not the semienclosed rear fenders used on the 600.

The senior Ambassadors came in several body styles, including models that were shared with the 600 (although the seniors carried much more standard equipment). The Six series featured a fastback four-door sedan, called Slipstream, in Special and Deluxe trim, and a four-door Trunk sedan that came only with Deluxe equipment. Two business coupes were also listed, plus a Brougham coupe and a two-door Slipstream sedan available solely as a Special.

Deluxe Slipstream models had foam seat cushions, nicer upholstery than Specials, front quarter-window ventilating locks, and front-floor mat-carpet inserts. To that, the Trunk sedan added a deluxe steering wheel and a rear center armrest. More exciting, though, was news that the Ambassador Six could be had in a body style not available on the 600 series -- an attractive convertible coupe.

The Ambassador Eight series came in an abbreviated lineup that included the Slipstream four-door sedans in Deluxe and Special trim, plus the four-door Trunk sedan, Brougham coupe, and the handsome convertible. All of the senior Ambassadors came with top-quality cloth seats except for the ragtop, which was upholstered in leather.

The new cars bore a strong family resemblance to the 1940 Nash line. The front end featured a high prowlike hood, flanked on either side by chrome "waterfall" grilles nestled just above five chrome bars that likewise were separated by the pointed front end. Nash name script was inscribed in the front bumper. Nash set the headlamps into the fenders, with oval headlamp rings that carried turn-signal lenses on their upper edge.

The "All-Purpose Cabriolet" lent an air of top-down glamour to the 1941 Ambassador line.

Overdrive -- which Nash dubbed "cruising gear" on the optional equipment list, but referred to as "Fourth Speed Forward" in sales catalogs -- was available on any model for $53.90. So, too, was Nash's Weather Eye heating and ventilating system, which was considered the best in the industry (and cost $30.10). Two-tone paint was available on all models except the convertible. All senior Ambassadors came with dual windshield wipers, sun visors, and horns.

Pushing for sales volume, Nash president George Mason showed restraint when it came to pricing the new cars. The Ambassador Six started at $855 for the business coupe and ran up to $1,095 for the cabriolet. The Eight series began at $1,051 for a sedan, running up to $1,215 for the cabriolet. Nash revised prices, mostly upward, several times during the year.

The complete Nash lineup was displayed in a beautiful sales catalog that proclaimed on its cover "There's a New Thrill!" There really was -- and Nash could point to registrations showing a whopping 35 percent increase (including sales of the 600) over the prior year as proof that the public loved the beautiful new line. Company profits for the fiscal year were a healthy $4,617,052.