Sizing up Mercury versus Ford makes clear some interesting differences. Early Mercuries had three-piece front fenders with no strip of stainless trim. Later examples utilized two-piece fenders with stainless. This was also true of the 1941 Fords.

Early parking lights in Mercury were very close in design to those of the 1941 Ford, but later units were bullet-shaped and unique to Mercury. Early models had the starter button on the steering column support; it was later moved to the dashboard.

The V-8 engine remained virtually the same as in 1939-1940: 239.4 cubic inches developing a rated 95 horsepower at 3600 rpm, compared to the 1941 Ford's 221 V-8 with 90 horses at a slightly higher 3800 rpm. Some sources still listed the horsepower at 85, but Ford expert Paul Woudenberg has pointed out that Ford actually underrated the output a bit.

In any case, the Mercury needed the extra oomph because it weighed in at least 100 pounds heavier than a 1941 Ford V-8. (The margin of weight difference became less in 1942, and even less in the postwar models.) Even though Ford introduced a flat-head six-cylinder engine in 1941, a good one that challenged the output of the V-8, it was never offered in the Mercury.

While Mercury's instrument panel featured the same general horizontal theme as did Ford's, it was considerably better detailed. Upholstery materials, too, were upgraded and offered in Bedford cord or broadcloth in closed models. It should be pointed out that while Fords came in either DeLuxe or Super DeLuxe guise, Mercury offered only one trim level. In fact. Mercury didn't offer an upscale series -- the Monterey -- until 1952, way behind the rest of the industry.

Perhaps the biggest change for 1941 was the model lineup. The Convertible Sedan, offered in 1940 only, departed, but a coupe and station wagon were added. The woody wagon's body was identical to Ford's, produced at the company's Iron Mountain plant in Michigan's Upper Peninsula. The Sedan-Coupe (or Club Coupe) was retained, but no longer featured the distinctive hardtop-like styling with the chromed window frames, a la the Lincoln Continental Coupe and Cadillac Series Sixty Special. Again, this was a cost-cutting measure to give the Mercury and Ford Sedan-Coupes the same bodies.

The coupe, which had a completely different body than the Club Coupe, was offered two ways: either as a three-passenger business coupe with a solid front seat-back that hinged at the top and lifted up from the bottom edge to provide a front opening into the luggage compartment, or with a split front seatback and two auxiliary (or opera) seats behind.

The Club Convertible now boasted an electrically powered top. Seats in the rag-top and wagon were made of high-quality, hand-buffed, antique-finished leather in tan, red, or blue. Eight exterior colors were listed for all models, and later in the year two-tone paint schemes became available. Prices started at $910 for the business coupe and escalated to $1,141 for the wagon.

U.S. model-year production came in at 90,556 units, with some 98,412 produced for worldwide consumption (including exports and completely knocked-down kits).

Madison Avenue's Hucksters (if you recall the Clark Gable movie of 1947) were at their best when it came to promoting the 1941 Mercury. The advertising agency responsible for the Mercury account at the time was probably N. W. Ayer, which had managed the Ford account for years, but would lose it to J. Walter Thompson in 1944.

Advertisements claimed that Mercury had more power per pound than most cars, which it did, plus aircraft-inspired engineering, aerodynamics, and styling. In fact, many 1941-1942 ads showed the new Mercurys alongside airplanes. The slogans were: "The aviation idea in an automobile," and "The big car that stands alone in economy." But the Mercury wasn't any bigger inside than the Ford, it wasn't any more aircraft-inspired than a Ford, and it wasn't all that economical.

The newly designed ride-stabilizer, brakes, window vents, and the amount of trunk and seating space were presented as being something exclusive to Mercury. They weren't, but in reading any Mercury ad the reader might get the distinct impression that this car was totally unlike a Ford. By associating the cars with aircraft, Mercury advertisements were truly "reaching for the skies," or perhaps even "floating on cloud nine." Ah, what dreamers the advertising agency copywriters were in those days!

On the next page, read about the design concepts that influenced the 1942 Mercury.

For more information about cars, see: ­ 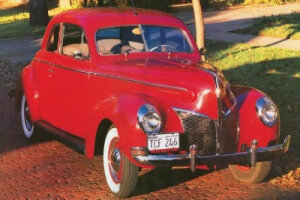 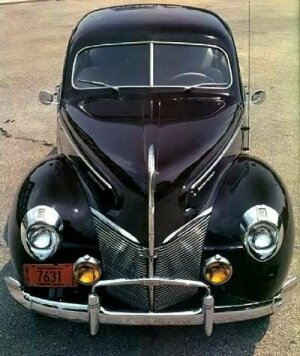 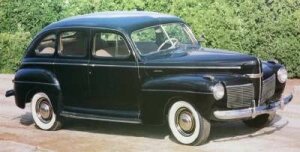