When production resumed, the 1946 Clipper featured wraparound grille bars on all models.
none

The 1941-1942 Packard Clipper made a splash with its luxury appointments. Then came World War II, and the three-year hiatus in car production.

"The logical next step would have been convertibles and commercials -- and a wagon," the late designer John Reinhart said. "[Dutch] Darrin's custom Clipper for Errol Flynn certainly represented what a production convertible would look like, although we abandoned any thought of returning to Dutch's full-sweep front fenders once GM's senior cars came out with that feature, for obvious reasons."

But the war stopped all that and Packard was faced at war's end with a plant torn apart for defense production and a bottled-up demand for new cars by a transport-starved America. The dies for the old-style seniors and convertibles had worn out or had been given away. (Ample evidence exists that the Soviets received Packard dies for the early postwar Zis.) Convertibles were forgotten in the rush to get back into production, using the now five-year-old but little-worn Clipper dies.

In a key decision that would determine Packard's future, president George Christopher determined to follow the path the firm had begun to take before the war, namely, away from the production of luxury cars and toward high-volume cars selling in the medium- and low-medium price classes.

Accordingly, a massive effort was put into the junior 120-inch-wheelbase line, and well over two-thirds of 1946 production comprised Clipper Sixes, Eights, and DeLuxe Eights (equivalent to the prewar One Ten and One Twenty) in the only two body styles available: sedan and coupe.

A relative handful of Supers and Custom Supers (formerly One Sixty and One Eighty) were built, including about 1,300 new long-wheelbase Custom Supers, the first Clipper-styled "professional" limousines and long sedans.

The production proportions were even more lopsided in favor of the junior models for 1947. The two postwar model years were virtually identical stylewise, though both boasted wider horizontal grille bars than the 1941 and 1942 junior Clippers.

To learn about the models Packard built when production resumed, check out the next page. 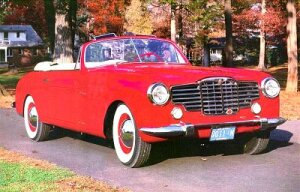