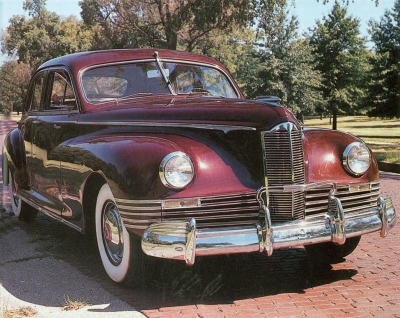 For war-shortened 1942, Packard "Clipperized" almost the entire lineup, including this One Eighty.
none

The original 1941 Clipper debuted as a single four-door model priced at $1,375-$1,420, precisely between the One Ten/One Twenty and the One Sixty/One Eighty but sharing the senior 127-inch wheelbase and the One Twenty's 282-cubic-inch straight eight upped by five horsepower to 125.

This made it a fairly expensive car, competing with the Cadillac Sixty-One, Lincoln Zephyr, Buick Roadmaster, and Chrysler New Yorker. Although it did not arrive until April 1941, 16,600 copies were sold for the remainder of the model year -- but this was only the beginning.

By the start of the 1942 model year, Packard had poured in a new line of Clipper-styled One Sixty and One Eighty models, including a svelte fastback coupe model in addition to the sedan. Simultaneously, the former One Ten and One Twenty were replaced by new 120-inch-wheelbase Clippers, except where special tooling existed for convertibles, taxicabs, and commercial cars.

"The One Eighty Clipper was also wider, almost as long, had more interior width, and almost as much legroom, compared to the long-wheelbase One Eighty of 1942, which still used the old-style bodywork. "

If all this doesn't convince you that the senior Clippers were genuine luxury cars, consider their interiors. "Both the old-style One Eighty and One Eighty Clipper for 1942 offered six quality wool broadcloths, rear center arm rests, plush carpeting, walnut grained instrument panel, and equivalent appointments," Hamlin continued. "The Clipper had a walnut grained smoking set on the back of the front seat, while the others had twin side armrests. Clippers did not have real walnut wainscoting, but they didn't have plastic dashboards either.

"Comparable Clippers had greater interior dimensions in all respects; they had identical mechanical equipment save for hydraulic window lifts; they had equivalent luggage space, weighed the same or more, had the same appointments, were priced the same, and met the same standards of fit and finish." They were luxury cars, all right.

But World War II would interrupt production. Learn what happened during the war by continuing to the next page.