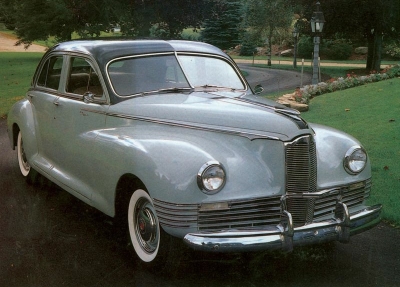 The Clipper Custom One Twenty was the top-of-the-line model in 1942.
none

Dutch Darrin, a driving force behind the styling of the 1941-1947 Packard Clipper, said he was recruited by Packard president Max Gilman in early 1940 and promised $1,000 a day if he could develop some acceptable lines on a small-scale clay model in 10 days.

"The irony of the thing was the fact that I never got paid!," said Dutch. "Packard's purchasing agent Jim Marks said to me, 'Now Dutch, you know the real money is in your custom Packards [the swoopy semi-customs, usually convertibles, he had been turning out on various Packard chassis since 1938]. So let's up your order for them by a substantial amount.' This they did, and then later they quietly canceled it."

That is the gospel according to the late Dutch. What seems sure is that he did in fact deliver a quarter-scale clay model to design director Ed Macauley, who brought it back to Detroit and showed it to his in-house team, and also to Briggs.

Alex Tremulis recalled that there was no doubt in his mind over the unidentified model's authorship: "There was the downward swept beltline and an inimitable Darrin blind quarter, with a Darrinized notchback roof flowing into a beautifully swept rear luggage compartment . . . it had a front fender flow that had the characteristic Darrin angle." He knew at once that it was a Packard -- and that Darrin had designed it.

The clay model, of course, was subject to design review by Werner Gubitz's Packard team. It is a tribute to their sense of style that they offered little alteration, but Darrin maintained that to touch it at all was to destroy it.

"The original called for a sweeping front fenderline that carried right on through the doors to the rise of the rear fender, similar to the custom Clipper I built later for Errol Flynn,." he said. "But Packard shortened the sweep to fade away at mid-door . . . because nobody knew if the through fenderline would sell."

Packard designers also raised the beltline to the point where there was no "damn dip," except behind the doors; they decreased the backlight for more passenger privacy; and they added traditional running boards but compromised by hiding them under a built-out section of sheet metal along the wheelbase. Darrin called the last act vandalism: "They threw on huge gobs of clay. . . . The Clipper never recovered."

As it turned out, this "look" guaranteed the Clipper an appearance never compromised by competitive imitators. When in 1942 -- not because they'd seen the Clipper earlier but out of normal styling development -- Cadillac and Buick adopted the selfsame "pontoon" fenderline so the Clipper still looked unique and, with its new long-wheelbase 1942 seniors, unimitated.

To learn about the production car built off of this model, see the next section.