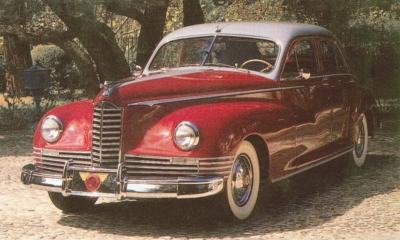 Dove wings in place of a license plate on this 1947 complement the Clipper's graceful styling.
none

A product of necessity, the 1941-1947 Packard Clipper was the result of what we might term Packard's recurrent Five Year Plans. Every five years or so, the conservative old company would take a concerned look at declining sales and mounting competition, overcome its inertia, and decree that something had to be done.

In 1923, Packard had opted out of the Twin Six and truck business to build its first Eights; in 1928 it dropped its Six to make Eights exclusively. In 1932, Packard moved upmarket with its new Twin Six (Twelve) and downmarket as well with the new Light Eight; in 1937 it shifted radically into high-volume production with a new Six to run alongside the popular One Twenty.

"By 1942," we may imagine Packard's management saying to itself, "we will need a full line of newly styled cars to keep abreast of competition." By 1942 they got just that: Clippers across the board, save for the low-volume convertible and a handful of luxury models.

Perhaps echoing its own forward-looking mood, Packard's 1942 brochure asked prospective buyers, "Looking Ahead?" The answer, of course, was to "Skipper the Clipper."

Alas, not many buyers got the chance to skipper a Clipper. World War II brought domestic car production to a standstill in February 1942, and in the process robbed the Clipper of what would have certainly been its peak sales years and a proliferation of body styles -- convertibles, wagons, and long-wheelbase cars.

In fact, notable designers showed how graceful some of them would have been: Dutch Darrin with his one-off Clipper convertible for Errol Flynn, Brooks Stevens and Briggs Body Company with fanciful renderings for Clipper fastbacks, Packard itself with the long-wheelbase models of 1946-1947.

George Hamlin and Dwight Heinmuller, in the 1978 Automobile Quarterly, succinctly explained the origins of the Five Year Plan that produced the Clipper: "After setting an all-time record in 1937 with its first 100,000-car year, Packard had sold half that number in recession year 1938, and only marginally [more] for 1939. The $3 million profit of 1937 had turned into a $1.5 million loss the following year, followed by a modest $500,000 profit in 1939 -- scarcely enough to live on. . . . Packard designs were not keeping pace with the industry when they absolutely had to -- a new experience for a company which never before had to meet styling competition."

To learn more about the design team behind the Clipper, check out the next page.