by the Auto Editors of Consumer Guide
NEXT PAGE
The well-received and profitable 1941 Studebakers decisively showed the company was over the tribulations that nearly sank it in the Great Depression of the Thirties. With updated Raymond Loewy styling and a promising technical advance, the ’42s might have had a chance to expand Studebaker’s success had not World War II intervened.

Addressing a Studebaker sales meeting during the new-car introduction in August 1940, company president Paul G. Hoffman stated, “In designing the 1941 models, we told Raymond Loewy that we would be satisfied with nothing less than the smartest, most luxurious car ever offered at any price.” At the same time, Hoffman also threw down the gauntlet to his dealer force of 3,500 to sell 151,000 units by year’s end.

This would be a tall order for a company that had been nearly down for the count in 1933 with the death by suicide of its president, Albert Russell Erskine, followed soon thereafter by entry into court-ordered receivership.

That it survived this crisis at all and lived for another 30-plus years was due in large part to Hoffman and board chairman Harold S. Vance. As a result of their dynamic leadership, the company had reorganized and paid off its creditors within two years, and was the leading independent automaker within six.

Studebaker could boast the oldest name in U.S. transportation, starting as it did as a wagon-making shop in South Bend, Indiana, in 1852. For nearly 60 years, the company was wholly owned and managed by members of the Stude­baker family. It entered the auto business in 1902 with its first car, an electric, and later branched out by creating bodies for the Ohio-built Garford.

In 1908, Stude­baker entered into an agreement with EMF, of Detroit, to market its cars (the EMF & Flanders) through its worldwide dealer network. Studebaker would later buy the EMF concern and incorporate all vehicle production under one umbrella called The Studebaker Corporation.

Several years before horsedrawn-vehicle production ended in 1920, active management of the company had already passed to Erskine, who led the company through many prosperous years before the combination of the economic depression and poor fiscal decisions on his part resulted in the catastrophes of 1933.

Whatever mistakes were made in the early Thirties, they were not repeated by the Hoffman-Vance team. They combined their unique talents in sales and manufacturing to build public confidence in the company, restore fiscal responsibility, and shore up the dealer network. One of their first cost-cutting measures was to completely realign the models and bodies then being offered.

In 1929, Studebaker was producing four different car lines, as well as numerous commercial-vehicle chassis. In addition, each series had unique bodies with virtually no interchangeability with the others.

By 1936, Hoffman and Vance had reduced Studebaker’s offerings to the President Eight and Dictator Six, and they would share bodies. All convertible production was halted; only coupes and sedans would be available.

By 1937, Hoffman and Vance were again looking at ways to gain a foothold into the low-price field. Studebaker had unsuccessfully attempted to crack this market with the Erskine in 1927-30 and the Rockne in 1932-33 (named for legendary University of Notre Dame football coach, Knute Rockne).

After a year of marketing research, Studebaker engineers and designers set about to create an all-new car to compete with the “low-priced three” of Chevrolet, Ford, and Plymouth.

This time success was achieved with the Champion, which was introduced in March 1939. Its impact was immediate and dramatic. Within its first two years, the Champion would account for more than 100,000 sales, which resulted in a significant boost to South Bend’s employment, the signing of hundreds of new dealers, and, most importantly, a greatly enhanced bottom line.

For most of the industry, the 1941 model year began in August 1940 amid grave concerns over the war in Europe. In the year since hostilities began, Germany had taken control of much of Europe, and in fact, at the very time that the new ’41 cars were being introduced, the German Luftwaffe was initiating its devastating bombing raids on England.

Studebaker announced it stood ready to assist U.S. defense preparations, as it had done in every conflict since the Civil War, but also emphasized it intended to maintain its schedule of production for civilian vehicles.

At the start of the model year, the President and Commander were offered in only two body styles, and both were four-door sedans. On the surface, this may seem a bit unusual, but from a dollars and cents standpoint, it was a smart move.

Studebaker bodies and other major sheetmetal components were made by the Budd Company, of Philadelphia, Pennsylvania. The cost of tooling up for a completely new body would often cost a quarter-million dollars or more. Sales data for the two previous years indicated a decided preference for the four-door sedan on the senior cars.

In fact, this body type accounted for nearly 85 percent of all sales, with the coupes and club sedans at only 6.5 percent and 8.5 percent, respectively. (Studebaker had not offered a convertible coupe since 1935, and produced only a very limited number of convertible sedans in 1938-39.)

The Cruising Sedan for ’41 was built along the conventional lines of previous four-doors. The rear doors were hinged in the rear with a sliding-type self-locking vent wing built into the body.

The new body type was called the Land Cruiser, a name first used to distinguish the aerodynamic bodies of 1934-35. It featured rear doors hinged at the center post. The vent wing was built into the rear door. This body carried an unmistakable similarity with the Cadillac Sixty Special, which was being widely imitated by other manufacturers and was thought to be favored by Raymond Loewy.

Studebaker used the phrase “slip streaming” in defining its new bodies. Care was taken by the Loewy stylists to remove humps, bumps, and unnecessary projections. Door hinges were concealed in the door posts; counterbalanced spring hinges eliminated exterior hinges from the decklid. The gas-tank filler cap was concealed under a trap door in the left rear fender. The rear fenders had functional steel-backed rubber gravel shields to protect them from road debris. The rear fenders themselves had a distinctive bulge that followed the contour of the wheel opening. The back glass had a slight curve to fit the body contour, and a splash shield was placed between the rear bumper and the body.

Without question, the most striking feature on the new Loewy-styled cars was the arrangement of the stainless trim along the beltline. Studebaker referred to it as the “color belt,” and it narrowed from the front of the hood to a point at the rear of the body.

Loewy indicated that its function was to “give the car a sense of motion even when it was standing still.” While that may be a matter of individual perception, one thing is for certain: It offered the opportunity to show off some very attractive color combinations, of which five were initially offered.

Two die-cast grilles with vertical vanes sat low in the front fenders, and a large double-bar bumper gave ample protection from minor collisions. A chrome-plated ornament with a wispy “S” on an oxblood-red field graced the leading edge of the hood. Another die-cast ornament measuring 19 inches long was centered on the decklid. The stylized taillights were long and narrow. They were fitted in the body rather than in the fenders, as in previous years. This arrangement had the advantage of providing for a lighted luggage compartment.

For more pictures and articles about great cars, see: 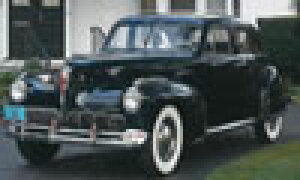