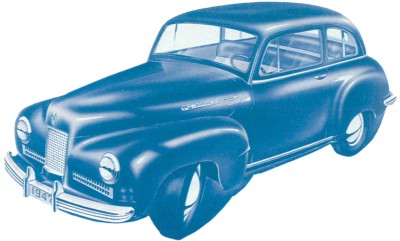 The 1940s Willys 6/66 concept car features showed promise. Although an ordinary transverse leaf spring appeared at each end, front suspension employed the novel "Planar" independent geometry devised by W-O chief engineer Delmar G. "Barney" Roos when he was at Studebaker (and used on the aforementioned Champ).

Out back was a "swinging independent, semi-floating wheel bearing" axle, though that presumably did not mean half-shafts, which would have been far too expensive for such a cost-conscious product.

Standard transmission was the usual three-speed manual with column shift, but optional overdrive was planned along with an automatic transmission of undisclosed (or, more likely, undecided) design.

The 6/66 progressed to a single running prototype, a two-door sedan that looked for all the world like a shrunken mid-1940s Hudson. Designer Stevens, then working as a consultant, also penned a convertible version with a fashionable blind-quarter cabriolet top, but it went no further than his drawing board. Stevens doodled numerous trim variations.

The 1940 Willys 6/66 concept car had become the Model 6-70 by the time this running prototype was photographed.
©2007 Publications International, Ltd.

Front-end workouts followed a common theme of a trim die-cast grille beneath a "coffin nose" hood reminiscent of the late, great Cord 810/812. Many of Stevens' renderings, as well as factory photographs of the lone prototype, showed "1947" license plates, suggesting that was the planned introductory model year. At one point, base price was targeted as low as -- you guessed it -- $666.

Somewhere along the way, the 6/66 became the Model 6-70, as shown on a set of general specifications dated April 17, 1945. It was the same car, however, and that was the problem.

Canaday had never liked it, and he liked it even less when the prototype was hit by a train during a trial run, killing the wife of the test driver. Joe stuck to his guns, but Canaday also stuck to his, so Frazer left in mid-1944 for Graham-Paige and his short-lived alliance with Henry John Kaiser.

In retrospect, Willys was wise not to pursue a compact in 1947. Demand for small cars, however cheap, was very thin in those days, and the 6/66 would have looked somewhat dated.

Though roomy for its size, the 6-70 was too small to have sold well in the heady postwar market.
©2007 Publications International, Ltd.

Besides, civilian Jeep business quickly proved to be highly profitable, and Willys was able to offer a far better car by waiting until 1952. Regrettably, its worthy new Aero-Willys sold well only in 1952 and was gone within three years, leaving Toledo to rely once more on Jeeps alone.

Of course, that was hardly tragic, even though the Willys name vanished completely by 1970. After all, Toledo has never stopped building Jeeps, and some people still think of them as Willys products -- not a bad fate for a defunct nameplate.