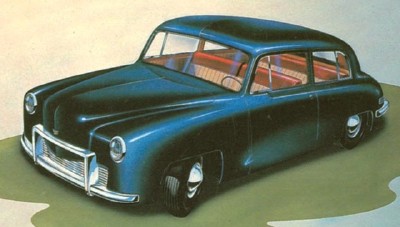 This small-sedan proposed by Brooks Stevens was among the rejected Kaiser-Frazer concept cars.
©2007 Publications International, Ltd.

Back in 1947, when Kaiser-Frazer was enjoying great success in the booming postwar auto market, Milwaukee-based industrial designer Brooks Stevens pitched a small car to Kaiser-Frazer. It would be just one of many rejected Kaiser-Frazer concept cars from Stevens.

Designed around a 108-inch wheelbase (same as the 1956 Rambler), styling was actually a bit dated and somewhat British-looking, except for the slab-sided bodies.

This car nevertheless would probably have been a saleable proposition. Visibility, for example, was excellent for the time, and price and economy would have been strong selling points.

The ever-optimistic Stevens also moved forward with suggestions for updating the original 1947 Frazer. One of them, an upmarket "Town Sedan," pretty much left the sheetmetal unchanged but sported lower-body cladding that predicted the use of anodized aluminum trim in the second half of the 1950s. Similar lower-body two-toning would also be trendy in the 1980s.

An apparently cheaper model, the "Custom Sedan," forsook the chrome-capped parking lights and had less bright trim above the grille bar, but looked a bit taxi-like in three-tone paint. The mildly heart-shaped windshield on these cars would become a design hallmark (and a safety feature) of the completely restyled 1951 Kaisers.

And Kaiser-Frazer was serious about safety, as seen in several instrument-panel designs. Each featured a Padded top and a lower edge that sloped away from the driver and passenger to help protect knees in an accident.

The speedometer and gauges were placed directly behind the steering wheel for quick, easy reading. The radio and speaker resided in the center of the panel for good sound distribution.

Stevens also sketched proposals for updating the original Kaiser and Frazer front ends. As he saw it, the Frazer would have a fairly elaborate bumper, and just above it a wide horizontal slot in place of a grille. The Kaiser, depicted as a Custom, would follow the same theme, except that the slot would be incorporated into the bumper itself.