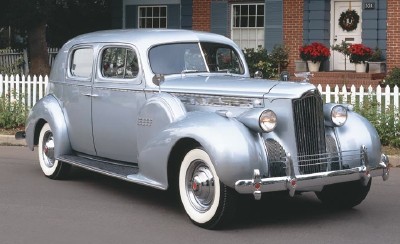 The 1940 Packard One Twenty club sedan had a  look and updated amenities. See more pictures of classic cars.

One thing the Packards of the 1930s and early 1940s could never be accused of was being slaves to fashion, but a notable exception is the 1940 Packard One Twenty. Even as the public increasingly began to perceive styling novelty as a sign of automotive progress, Packard changed more gradually.

It preferred for the upright lines and famous "ox-yoke" vertical grille of its cars to suggest allegiance to substance over style. Still, while outward changes were slow to come to Packard automobiles, they did come nonetheless.

The 1940 One Twenty incorporates several nods to changing automotive styles, plus a new -- and ultimately rare -- body style. It also contains a number of engineering refinements.

The unmistakable Packard look was subtly altered for 1940 with small side grilles, a styling touch that was already being used on other cars to make them appear wider when viewed from the front.

Also, headlight pods now rested on the front-fender "catwalks," a step toward the eventual integration of the lamps into the fenders that would take place in 1941. Then, too, those headlight pods were now filled with brighter sealed-beam lamps. Parking lights were shifted to slender nacelles atop the fenders.

The four-door club sedan was new to the Packard lineup in 1940. Compared to the touring sedan, the club version featured blank upper rear quarters and a rounded trailing edge to the upper portion of the rear door.

The style was restricted to the One Twenty and Super Eight One Sixty series. (As a One Twenty, it was available in base trim and, for an extra $50, in a new Deluxe subseries with plusher upholstery.)

The One Twenty was the eight-cylinder member of Packard's "junior" series. For 1940, it was powered by a 282-cid inline L-head engine. As in recent years, it made 120 bhp, but peak horsepower now came at 3,600 rpm instead of 3,800 revolutions. Overdrive had been available with the three-speed manual transmission, but for 1940, it was a new electric Warner Gear unit.

Though exact model production figures aren't available, the car is a rarity among pre-World War II Packards. The club sedan style was produced only in 1940.