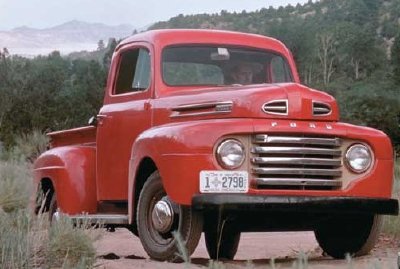 In January 1948, a new era began at the Ford Motor Company with the release of an all-new line of trucks that Ford dubbed the "F-Series."

This new series, which Ford promoted as its "Bonus Built Line," covered a wide range of models with different cab and chassis combinations. The line started out with light-duty 1/2-ton-rated pickup trucks and ran all the way up to the Extra Heavy-Duty, three-ton-rated F-8. These trucks used a completely redesigned cab with all-new front-end sheetmetal. And in a departure from previous practice, the same cab served both conventional and Cab-Over-Engine models.

Along with the fresh styling given 1948 Ford trucks came new model designations; this 1/2-ton was labeled the F-1. Squared-off front fenders wrapped smoothly into the front fascia, which contained a prominent horizontal-bar grille. Rear fenders were styled to match the profile of the fronts. Also new was a one-piece windshield.

To clearly identify its expanding line of trucks, Ford put the series identification on the cowl, just ahead of the door; this F-1's ID can be seen just above the trailing edge of the front fender. Less well-publicized was the engine beneath the hood, which in lighter-duty models could be either the 226-cubic-inch six-cylinder with 95 horsepower, or a 239-cid flathead V-8 with 100 hp.

A 11/2-ton-rated F-5 chassis was fitted with a special body for this Coca-Cola distributor.

Compared with today's trucks, those of the 1940s had a decidedly different seat/steering-wheel relationship, with the wheel being mounted closer to the driver in a more horizontal position. Note that dashboards on the new trucks were still rather plain.

New for 1949 were stand-up Ford Parcel Delivery trucks. Read about Ford trucks in 1949 in the final section.