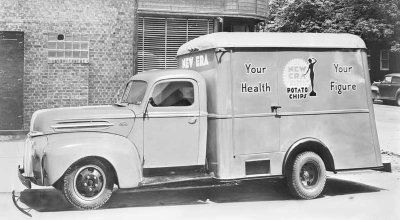 The War Production Board allowed the automobile companies to produce more vehicles for the civilian market starting in early 1945. Ford took this cue to boost production of its heavy-duty trucks, which were introduced in May of that year. Though they looked like Ford's 1942 models, they were treated to a number of modifications, including an improved V-8 engine.

In September 1945, Henry Ford finally stepped down from leading the company that bore his name. As expected, he was succeeded in the presidency by his grandson, Henry Ford II.

What Henry II inherited was a company in rather dire straits. Ford Motor Company had been on unsteady financial footing before the war, and didn't emerge from it in any better shape. It would prove a formidable challenge to turn the company around, but its new president succeeded.

Ford's Cab-Over-Engine models returned to the lineup in 1946, and were joined by some heavier-duty two-ton models. These "Ford Heavies" featured reinforced frames, two-speed rear axles, heavier-duty springs, and larger tires.

New Era potato chips were delivered -- and promoted -- by this 1946 one-ton Ford truck, which was now referred to by the factory as a "Tonner."

A Ford Panel Delivery shows off its postwar face, which was little different from its prewar look. Note the "spare tire," that is just a wheel; even after the war, rubber supplies were short, and many vehicles didn't come with a mounted tire.

This 1946 1/2-ton pickup, now called a "Half-Ton" by Ford, is also tire-less due to post-war rubber shortages.

On April 7, 1947, the Ford company -- and indeed, the country -- mourned the loss of one of the automotive industry's great pioneers when Henry Ford died at his home. He was 83.

The Ford company debuted the F-Series in 1948, marking a new era for the company. Read about these Ford trucks in the next section.