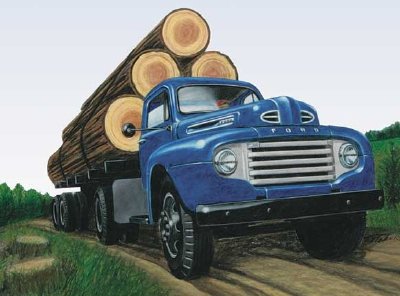 For the truck-makers at the Ford Motor Company, the 1940s can best be described as a roller-coaster ride. It would celebrate a number of high points during the decade, but would also have to endure its share of lows.

Things started out well for Ford, particularly when it came to its commercial vehicles. Practically all of them featured fresh styling cues, with lighter-duty models mimicking the look of their automotive cousins.

Heavier-duty trucks -- except for the Cab-Over-Engine models -- were also restyled, though not in the same vein. All Ford regular-cab models used reworked cabs that incorporated a one-piece cowl top, roof, and windshield-pillar stamping. They also got a new instrument panel, along with sealed-beam headlights.

The war effort later in the decade gave Ford the ability to produce more trucks. This led to the the new era with the "F-Series" during the last few years of the decade.

In 1940, Ford trucks took on car styling for the first time since 1932. Look at photos and read about 1940 Ford trucks in the next section.