Praise for the Jeep 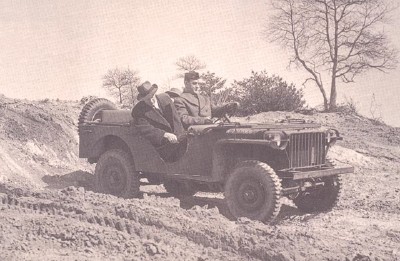 Though testing continued, the Army ordered 1,500 jeeps each from Willys, Ford, and Bantam to be released in the Lend-Lease program.
©Chrysler LLC

Just how effective a weapon of war the now-standardized jeep had become can be judged from an account given by Major J. H. Chamberlain after he had been given an obviously strenuous demonstration ride:

"Grueling tests showed that the jeep could fight as well as run," wrote the Major. "And it could go places a motorcycle couldn't. Besides, a motorcycle dispatch rider is vulnerable; a single sniper can cut him down, letting vital orders fall into enemy hands. A jeep, carrying armed men and machine guns, is a far tougher proposition. And, vital for combat strategy, the jeep is a clawing, climbing hellion in reaching good places to shoot from.

"In Mississippi I learned firsthand what it was like to ride in a jeep across pine-studded acres at 50 miles an hour . . . . [The driver] slowed down our jeep and straddled a half-burned log, front wheels tilted to the sky. I visualized a shattered crank case but was shown guard bars underneath for just such protection. Grabbing special handles on the body, we lifted the car and shoved it easily off the log.

"Army strategists especially admire the jeep's low silhouette. Only three and a third feet high, the jackrabbit-like jeep is hard to spot in brush country, still harder to line a gun on.

"At 25 miles per hour he headed for a huge live oak with gnarled branches close to the ground. I was expecting [the driver] to swerve suddenly to demonstrate the jeep's maneuverability. Soon I saw that it was not his intention to swerve at all.

"We roared under the lowest branch-the top of our car missing it by inches. Only then did I realize that I had stowed my 190 pounds in the narrow space between seat and cowl-and had lots of leg and arm room to spare.

"We crossed a small stream, water flowing over the floor, but we had no trouble, for electric units are placed so high that the 40-inch jeep can keep going through water 18 inches deep. We clawed our way up the 30-degree bank-twice as steep as you'll ever meet in a passenger car on the highway."

The MB and GPW jeep models went on to create history.
©Chrysler LLC

In Major Chamberlain's view, and in the minds of most Americans, the jeep had come to represent the inventive imagination that had made this nation's industries the envy of the world.

Willys and Ford soon received contracts to continue manufacturing jeeps, while Bantam was left behind. Learn more on the next page.