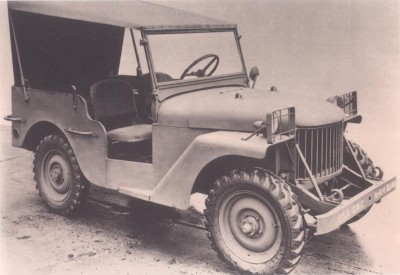 The Willys-Overland Quad made its debut on November 11, 1940.
©Chrysler LLC

After the extensive testing of the Willys, Bantam, and Ford early jeep models was completed, the QMC placed an order for 1,500 more of the little machines from each company. This represented a compromise, worked out on November 14, 1940, with the help of the National Defense Advisory Commission. The General Staff had wanted the original order to go entirely to Bantam, while the Quartermaster General -- who took a dim view of Bantam's production prospects -- preferred to rely on other suppliers.

All three manufacturers had submitted proposals that were essentially satisfactory. There were, however, some significant differences between models, and they are the following:

Thus, though all three models differed in several ways, they were becoming increasingly similar. Willys, however, was up against a serious problem, for the Army made it known that the 2,160-pound weight limit was official and final.

The Bantam jeep model was the lightest and most fuel efficient of the jeep prototypes.
©Chrysler LLC

As Wells tells the story, "Only the decision of Under-Secretary of War Patterson broke the impasse." Colonel (later Brig. General) H. J. Lawes, the commandant of the test center at Camp Holabird, told Willys-Overland officials that there was some flexibility in the weight specification. So Patterson agreed to permit Willys to proceed with the production of their 1,500 vehicles with an exemption to the weight limitation.

Not that the issue was forever settled. Ward Canaday later recalled, "We had won a first round, but we still were squarely faced with the threat of losing all future orders beyond the 1,500 if we did not make the 2,160 pounds weight and of losing them anyway, on a performance basis, if we abandoned our own powerful engine and rugged design in order to meet the lower weight requirement."

So it became imperative for Willys to pare 263 pounds -- 12 percent of the total -- from the weight of an already bare-bones vehicle. And, they had to do this with no sacrifice of either strength or power.

On the next page, find out how Willys achieved a lighter jeep that surpassed the designs of both Bantam and Ford.