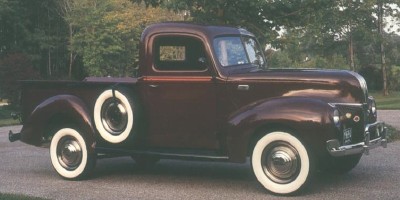 Ford redesigned the 1940 Ford half-ton pickup along the lines of its 1939 cars, creating what many consider to be the most beautiful trucks of their time. See more classic truck pictures.

Improved engineering and handsome styling made the 1940-1941 Ford half-ton pickup a popular choice among truck buyers in the 1940s.

As fresh and distinctive as on the cars, that look has stood the test of time beautifully.

Behind the new face of the for the 1940-1941 Ford half-ton pickup was a host of mechanical improvements. Cabs were sturdier and wider, and windshields were fixed with cowl-mounted wipers (but crank-open windshields were available).

The 1941 Ford half-ton pickup looked almost identical to the successful 1940 model, though the choice of engines was expanded.

Underneath, light-duty trucks retained what amounted to a Ford car frame: a double-drop design with X-member bracing, stamped from heavier 10-gauge steel instead of 11-gauge. Suspension was still by transverse leaf springs front and rear, which dated from Ford Model T days, plus lever shocks and, on some models, a front stabilizer bar.

The handsome new styling of the 1940 Ford half-ton pickup was a big asset against rival Chevy's carryover fleet in 1940, but Chevrolet's redesigned AK-series for 1941 was more formidable. Ford countered with minor trim changes, deciding there was no reason for wholesale revision of Gregorie's excellent design.

Standard engine in 1941 was Ford's 221-cid flathead V-8 with 90 bhp, though a Mercury 239 with 95 bhp and the small Ford V-8/60 were optional. In mid-season, the V-8/60 was replaced by a 120-cid four-cylinder engine from the Ford 9N tractor-a curious choice, and not very popular. Even rarer was the passenger car's inline six, a late-season no-cost option

The handsome trucks pictured with this article are painted a solid color, though it was possible to two-tone in 1941 by paying extra for black-painted fenders. Bodyside pinstriping was optional.

More than just a pretty face, the 1940-1941 Ford half-ton pickup trucks were s turdier and wider than their predecessors, with more car-like cabins.