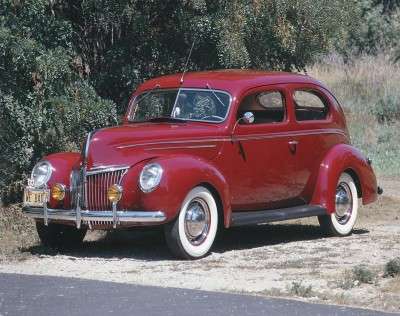 The 1939 Ford Deluxe was the carmaker's  model of the year. See more pictures of classic cars.

Fans of American cars of the 1930s know well that the 1939 Fords, including the 1939 Ford Deluxe, adopted hydraulic brakes. After years of stubbornly resisting this advance in engineering as market rivals Plymouth and then Chev­rolet adopted it, Henry Ford abruptly reversed course in time for "juice brakes" to be applied to most '39 Ford Motor Company cars.

That was hardly all that was new on the 1939 Fords. In an effort to improve cooling to the L-head 221-cid V-8 standard in premium DeLuxe models, the frontal area of the radiator was increased. The engine itself, conservatively rated at 85 bhp, was upgraded with larger bearings and a heavier crankshaft that now drove the engine fan. Deeper springs were part of newly constructed seats.

Other elements of the 1939 Ford Deluxes were "old" -- or at least continued from recent years. They included traditional torque-tube drive and transverse leaf springs front and rear. The 112-inch wheelbase had been in place since 1933.

Though DeLuxes were dressed in sleek new frontal styling, bodies were essentially carried over from 1938. Nonsealed-beam headlights and windshields that popped open at the bottom for ventilation (on closed bodies) were both putting in their final appearances. So were the rumble seat (found only on the convertible coupe) and the four-door convertible body.

The base Standard series, powered by the unloved 60-bhp "economy" version of the Ford flathead V-8 hooked to a three-speed floorshift transmission, also sported year-old frontal styling on a limited number of body styles. The updated, better-trimmed, and more powerful DeLuxe came in a full range of bodies.

The most popular Ford of '39 was the DeLuxe two-door sedan (or "Tudor," as Ford playfully called it) with 144,333 produced. At a base price of $742, it delivered all of the passenger room of a "Fordor" sedan, but at a then-substantial savings of $46.