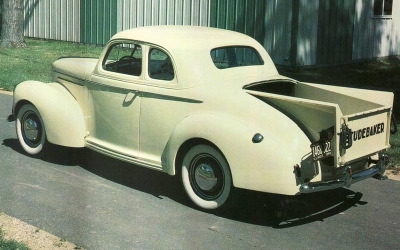 The 1940 Champion pick-up coupe had a cargo box that could be slid into the trunk cavity as needed.
David Durochik

Calendar-year sales were even more impressive, Studebaker gaining 94 percent against 41.4 percent for the industry as a whole. Equally welcome, the company added 1,506 new dealers in 1939 and hired nearly 2,000 new workers in South Bend.

The balance sheet showed net sales of $81,719,106, a stunning 87-percent gain in just one year. By any measure, the Champion was an unqualified success.

Studebaker was understandably loath to tamper with that, so changes for 1940 were principally cosmetic, though sealed-beam headlights were obvious, as on most American cars that year. A four-piece grille returned with more vertical and horizontal "teeth," door handles were integrated with the belt moldings, and bumpers were given more contour, but that was about it.

There were some interesting new body variations, however. Studebaker had experimented with small folding rear "opera" seats for very late 1939 coupes, and the idea returned for 1940 as a $35 "opera coupe" option. This was actually a dealer-installed kit that added a small fixed rear seat to the normal three-passenger coupe. The kit was supplied by Edwards Iron Works of South Bend (which sold it to Studebaker for $30 list).

Edwards also came up with "ambulance coupe" and "slumber coupe" packages. The latter consisted of a rear seat that could be laid flush with the floor to form a makeshift bed. The ambulance coupe had a folding back seat and a small stretcher for loading an injured person flat through the trunk aperture. The package cost $125, complete with cot and mattress.

The most involved conversion for the 1940 Champion coupe was the "coupe delivery," or "pick-up coupe." This involved a cute cargo box measuring 31 inches wide and 18 inches high that could be slid into the trunk cavity as needed (the trunklid was furnished loose). There was even a tailgate with stamped-in "Studebaker" lettering. The box sold for just $25 in black, $26.50 if painted another color.

Edwards also did a few "sedan delivery" conversions on 1940 Champs. These were Club two-doors fitted with coupe floorpans and no rear seats to allow carrying the spare tire horizontally thus leaving maximum interior space for cargo. Also serving utility were painted metal blanks instead of glass rear side windows and fiberboard on the rear inner sidewalls from floor to ceiling.

All this added just $36.50 to the cost of the regular two-door. For another $28 you got a partition with a sliding door and a drawer.

The Champion turned in the best overall mileage regardless of price class, recording 29.19 mpg, excellent for the day. (The other two Studebakers also won their classes for the second year in a row, the Commander notching 24.72 mpg, the President Eight 23.4.)

In partial recognition of both its popularity and economy, the Champion was selected to pace the 1940 Indianapolis 500, Since there was no Champ convertible, a DeLuxe two-door (finished in Champion Maroon) earned the distinction of being the first closed car ever to pace the annual racing classic.

Back in the all-important sales race, the Champion almost doubled its 1939 volume, ending the 1940 model year in late June at 66,624 units (including more than 7,000 assembled at Studebaker's Los Angeles plant). That added up to over 100,000 sales in just two years, and it was only the beginning.

Hoffman had gambled 4.5 million dollars on the Champion, but it obviously more than paid off. At long last, Studebaker was struggling no more.