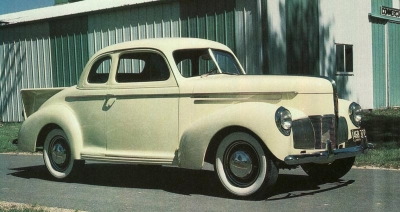 The most involved conversion for the 1940 Champion coupe was the coupe delivery, or pick-up coupe.
David Durochik

Three Studebaker Champions were assembled on January 30,1939, followed by a single car on February 8, 23 the next day, and finally 24 on February 10. All were four-door sedans painted Morocco Gray.

The production line was then shut down and virtually everyone in engineering was given a car and told to drive it at least 10,000 miles. Among them was Ray Sharp, now over 90 years old and still a South Bend resident.

Ray recalls driving his Champ out to Omaha, Nebraska, and returning in a blizzard (which likely explains why he still remembers how well the Climatizer worked). Sharp and most other staff had nothing but praise for the new car. With this one last seal of approval, a satisfied chief engineer Cole gave the go-ahead for full production.

In the meantime, Studebaker commissioned a professional film titled "Ahead of the Parade" to be shown at theaters across the country as a short subject. On the airwaves, Richard Himber and his "Studebaker Champions Orchestra" trumpeted the new model on 96 radio stations three nights a week. Not since the Ford Model A had a new car received so much publicity.

But it had the desired effect, and Studebaker dealers soon had more floor traffic than they'd seen in years. Some even complained they couldn't keep their demonstrators off the street.

Paul Hoffman reported to the board in April that "demand for the Champion continues to exceed the capacity of the plant working on a single shift basis." The next month he happily told directors that "public reaction has exceeded our expectations."

This enthusiastic reception was earned with only three body styles: four-door Cruising Sedan, two-door Club Sedan, and three-passenger coupe (designated W, F, and Q, respectively). All were available in Custom and DeLuxe versions. The former came with a single windshield wiper, sun visor, and taillight.

The Champ had major selling points in its optional overdrive transmission and "Hill Holder," the only low-priced car to offer these features in 1939. The OD was a real gas and engine saver well worth its modest $45 cost, giving a final-drive ratio of just 3.19:1 in conjunction with the standard 4.56:1 rear axle.

The Hill Holder, as its name implied, kept you from rolling down inclines while the clutch was depressed. Studebaker had pioneered this feature for 1936, and it was a bargain on the Champ at just $8.50. Other popular accessories included Climatizer ($28.70), Phiico in-dash radio ($37.50), and clock (by New Haven, $9.75).

Learn about the 1940 Studebaker Champion in our final section.