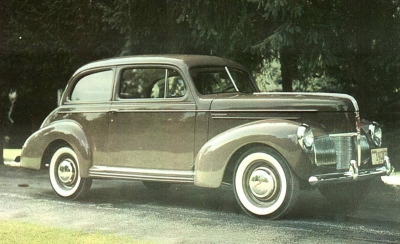 Chassis and engine work were nearly complete for the 1939 Studebaker Champion when Hodgman got the assignment, so he proceeded with dimensions and other important "hard points" firmly in mind.

Studebaker management wanted nothing radical, just a conservative, "lightweight" design that would sell well. Hodgman came through with an attractive, contemporary body boasting several features not found on other low-priced cars.

For example, he omitted running boards (which saved another 33 pounds), and further cleaned up appearance by using concealed door and trunk hinges. The interior was designed for installation of the "Climatizer," Studebaker's heater/defroster system that put the heating unit below the driver's seat so as not to reduce leg room.

Following the lead set by engineering, the complete body, including fenders and all hardware, ended up 125 pounds lighter than the competition's, yet it looked just as substantial.

To build the new car, Studebaker installed more than $3 million worth of new equipment and tooling during 1938. That impressed technical journal Automotive Industries, which ran a 16-page feature on the new "state of the art" manufacturing operation and lauded the firm for its "flexibility of thinking and courage to explore new fields of activity."

Engineers were equally busy testing four prototypes built with older-model Studebaker bodies at a cost of $60,000 apiece. Each was driven in excess of 100,000 miles at the company proving grounds and also on highways throughout the Midwest before being completely disassembled and checked for wear or damage.

Of course, the search for potential "bugs" took time, and it combined with the extensive plant retooling to delay the new car's introduction from fall 1938 to April 1939. Ironically though, that worked in Studebaker's favor, as dealer used-car inventories were by then exceptionally low. Then, too, the new model wouldn't have to share the spotlight with other 1939 Studebakers.

It remained nameless until quite late in the game, referred to inside the company as just the "X-model." Studebaker had polled its dealers when naming the Rockne (after the University of Notre Dame's famous football coach).

We're not sure that happened with the new low-priced 1939, but we do know that "Champion" wasn't decided upon until mid-January of that year. The board was definitely not involved, so the choice most likely came from Hoffman or someone on the executive board.

It was a natural in any case. Though used generically, Champion had been seen in Studebaker advertising since 1928, when the firm embarked on its campaign to rewrite the record books for speed and endurance. Its full-line 1935 catalog, for example, was titled "Studebaker Champions."

But the last-minute selection left no time for the legal staff to register "Champion" as a trademark, so the name wouldn't appear on the cars themselves until the 1941 models, which wore it on their hoods.

To learn about the success of the 1939 Studebaker Champion, see the next section.