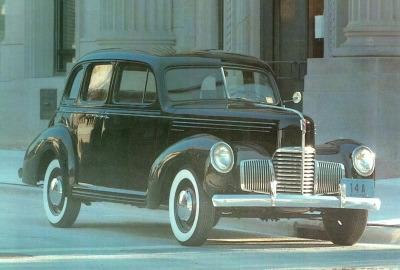 The concept behind the Studebaker Champ was a smaller engine in a lighter car for maximum fuel efficiency.
David Durochik

Hoffman saw Studebaker as the venturesome independent. He recognized that low-priced offerings had become larger and heavier, thus blurring distinctions with medium-priced models.

One reason was the Big Three's tendency to engineer powerplants for low-priced cars so they could be easily enlarged for use in their medium-priced lines. That meant relatively large and heavy engines with chassis to match -- and a consequent reduction in operating efficiency.

With a smaller, lighter engine in a weight-conscious car designed exclusively for it, Studebaker might carve its needed niche in the low-price market.

To handle the task, Hoffman tapped chief engineer Roy E. Cole, who had come to Studebaker from Chrysler's Dodge Brothers division in 1929. According to Harold Churchill, former engineering v.p. and a later Studebaker president himself, Cole was perfectly suited for the job, as "a lightweight economy car had always been a fetish of his."

Cole took a hand-picked group of engineers to Detroit, where they set up drafting tables in a dusty corner of the old EMF building on Piquette Avenue (a structure built by Henry Ford in 1904 that still stands today).

The reason for moving from South Bend was to avoid any pressure from those not directly involved in the project. The team had been given the proverbial clean sheet of paper, and it wanted no interference.

Freed from the constraints of designing an engine with room to grow. Cole's team, headed by Eugene Hardig, created a minor masterpiece: a flathead six of 164.3 cid that weighed only 455 pounds -- including transmission.

That was 155 pounds lighter on average than a comparable Big Three engine, yet the new design yielded only six less horsepower. Bore and stroke measured 3.00 x 3.83 inches. Compression ratio was set at 6.25:1.

Cole's team devised a flathead six that was 155 pounds lighter than any of the Big Three's competitors. This one is housed inside a 1940 Champion Custom.
David Durochik

Thoughtful simplicity was the essence of this engine. For example, the crankshaft not only had integral balance weights but also ran in four main bearings of 2.29-inch diameter, which meant 10-42 percent more bearing surface area per cubic inch than competitive engines.

The crank's rigidity eliminated the need for a weighty vibration damper, and all main and connecting-rod bearings were interchangeable steel-back Babbitt-lined types.

Despite its weight-saving design, the new six proved durable and flexible enough to be used in Studebaker's smaller trucks beginning in 1941. It then went on to power the M-29 "Weasel" personnel carriers that Studebaker built during World War II. In fact, this engine would persist in South Bend with only minor variations through the 1960 model year, after which Studebaker gave it an overhead-valve cylinder head.

Some years ago, John Bond, a former Studebaker engineer and later editor of Road & Track, observed that this was "one of the first engines of its era that would take 5,000 rpm for hours on dyno tests."

For more information on the development of the 1939-1940 Studebaker Champion, continue on to the next page.