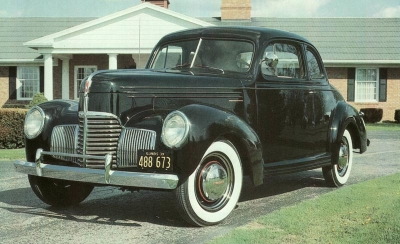 The company struggled through the years following the Depression but rolled the dice on the Champion in a market they had previously misjudged.
David Durochik

Hoffman and Vance acted as receivers but would not hear of liquidating the venerable South Bend, Indiana, concern. Up against incredible odds, they worked tirelessly with the banks, vendors, the local labor force, and dealers to forge a new company. By 1935, Studebaker was victorious, and Hoffman and Vance were cynosures of the industry.

Despite the accolades heaped upon them, both men knew the company was perched on a slippery ledge. At the close of the 1935 model year, Studebaker clutched to a slim 1.4 percent of the U.S. auto market -- an all-time low -- after selling only 50,000 cars.

The figure was only two percent by the time Hoffman pitched the board in April 1938, when he noted that Studebaker needed at least a four percent share (approximately 125,000 vehicles per year) just to survive.

Management felt it wishful thinking to believe any share increase could be attained with only medium-priced products. Studebaker needed at least a small corner of the low-price market.

But as the directors learned, a new smaller car had been in the works for some three years, and a running prototype was being tested at the time they voted to proceed with production.

The story of this car's development begins in early 1935, when Hoffman gathered the engineering staff in his office. Most of those attending had been involved with Studebaker's two previous ventures into low-price territory, then largely ruled by the Big Three.

The first was the spritely Erskine of 1927-1930; the second was the even less successful Rockne of 1932-1933. Both these failures probably had less to do with the vehicles themselves than they did with poor timing, pricing, and marketing.

Seeking to avoid making the same mistakes again, Hoffman commissioned a survey by a marketing research firm called Facts, Inc., to learn what people wanted in an automobile -- and what they didn't like about their present transportation.

The results, tabulated from over 5,000 respondents, showed a preference for a full-size car with at least six cylinders, a comfortable ride, good operating economy -- and a price of only $600-$800.

In particular, the surveys showed that fuel economy had been a constant concern between 1935 and 1938, with close to 20 percent of respondents reporting it as their greatest disappointment. Indeed, one independent study calculated that the average driver in 1938 was achieving only 13.6 mpg.

So how to design such a car? Learn what Studebaker did on to the next page.