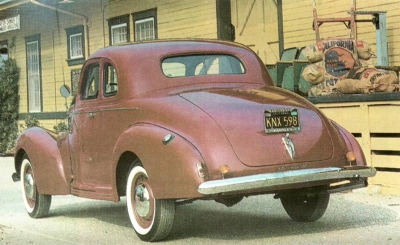 The 1939-1940 Studebaker Champion was a huge commercial success and helped put the one-time struggling carmaker back at the forefront. See more classic car pictures.
David Durochik

The 1939-1940 Studebaker Champion was a roll of the dice in a market Studebaker had misjudged before. It wasn't enough for Studebaker's two leading executives to have rescued the company from ruin during the Great Depression; Harold Vance and Paul Hoffman had bigger, farther-reaching aims than that. Introducing the Champion was one way to realize them.

"Resolved that the program . . . for bringing out a new model passenger car in the low-price field be, and hereby is, approved." So said the Studebaker board at its meeting of April 26, 1938. It was a seemingly simple decision, taken at the behest of president Hoffman and board chairman Vance, yet it amounted to a 90-degree turn for the 86-year-old company, which had started life making farm wagons.

In fact, this action would prove one of Studebaker's most important to date, one that would bring new vigor to the struggling automaker, at least temporarily.

Harold S. Vance had worked his way up from the bottom, having started as a machinist's helper at the old EMF (Everett-Metzker-Flanders) company in Port Huron, Michigan, in 1910. When Studebaker absorbed EMF, Vance was promoted to purchasing agent, then to assistant treasurer. By 1926, he had risen to vice president in charge of manufacturing and engineering. In 1935, he was named chairman of the board.

Paul Gray Hoffman had taken a far different path to the top. Born and raised in Chicago, he started his career as a porter for the Halladay Auto Company in 1908, then began selling Studebakers three years later. Recognizing a large and mostly untapped market in southern California, he emigrated there in the early Teens and proceeded to strike it rich.

A hard worker and a natural-born salesperson, Hoffman amassed a sizable personal fortune by 1925 after establishing several profitable Studebaker outlets in the Los Angeles area. This phenomenal success prompted Studebaker president Albert R. Erskine to offer him the job of vice president for sales.

Hoffman's intelligence and business acumen put him a cut above Studebaker's other junior executives, and he was named president in 1933 when the firm was forced into bankruptcy (and Erskine committed suicide).

Learn how Hoffman and Vance saved the automaker on to the next page.