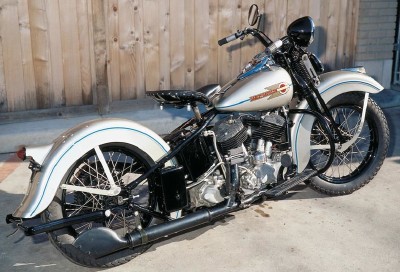 Despite growing use of Haryle's "Knucklehead" engines, the 1938 Harley-Davidson UL used a flathead Big Twin.

The 1938 Harley-Davidson UL motorcycle was one of the innovative models Harley offered as the company made its big comeback from the doldrums of the Great Depression.

After recovering from a difficult period in the early 1930s, Harley-Davidson was poised to forge ahead with a complete lineup that included 11 different models. It was built around "Big Twin" engines of 61, 74, or 80 cubic inches, all of which shared several components.

The 1938 Harley-Davidson UL motorcycle was a Sport Solo model with a 74-cubic-inch flathead powerplant.

Flatheads had been modernized in 1937 with the adoption of the recirculating oiling system introduced on the Knucklehead the year before, and in 1938 gained more subtle changes: Higher handlebars resulted in a more comfortable riding position, the instrument panel was simplified by replacing the ammeter with a red warning lamp and the oil-pressure gauge with a green lamp, and new colors and striping were made available.

Surprisingly, Big Twin flatheads remained in the Harley line for a dozen years after the debut of the famed Knucklehead overhead-valve models.

And the smaller 45-cubic-inch flathead V-twin continued to power three-wheeled Servi-Cars into the 1970s -- both indications that many riders continued to admire the inherent simplicity of the flathead design.

Continue to the next page for more pictures of the 1938 Harley-Davidson UL motorcycle. 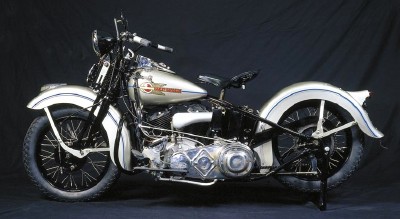 The 1938 Harley-Davidson UL motorcycle, with its 74-cubic-inch powerplant, carried on the tradition of flathead engines that would last for a dozen more years at Harley.

The UL replaced ammeter and oil-pressure gauges with red and green lamps.
New colors and striping were made available in the 1938 Harley-Davidson UL.
The horn was embossed with Harley's bar-and-shield logo.