The Series 61 and Series 62 Cadillac's were priced substantially less than any Cadillac of recent memory -- as little as $1,345 for the standard 61 coupe. Befitting its name, the 1938-1941 Sixty-Special Cadillac was still at $2,195 for the base four-door, and suffered a small production loss (about 500 units) from the previous year.

Yet mainly due to the success of the two lower series, the division nearly doubled its production for model year 1941 compared to combined 1940 Cadillac/LaSalle volume. Interestingly, that was accomplished without major mechanical changes. The one significant under-the-skin alteration for 1941 was a more rigid frame designed for a smoother ride on all types of roads.

We’ve concentrated a good deal on styling so far. The 1938-1941 Sixty-Special Cadillac was unquestionably a design tour de force, but we shouldn’t forget its performance, which was -- and still is -- just as impressive. Cadillac had settled on the 346-cubic-inch version of the monobloc V-8 for all its eight-cylinder models except LaSalle beginning in 1937. Rated at 135 horsepower at 3400 rpm, the 346 had five more horses than the 1935 V-8 and 10 more than the one-year-only 322-cubic-inch monobloc.

The Sixty-Special Cadillac arrived weighing only some 230 pounds more than a comparable 1938 Series 60 sedan, so its power-to-weight ratio was less than 31 pounds per horsepower, quite good for the period. By contrast, that year’s Packard Super Eight -- which, incidentally, cost $700 more than the Special -- carried nearly 35 pounds per horsepower.

The 346 continued without change until 1941, when higher compression pushed output to 150 bhp, more than enough to offset the restyled Special’s slight weight gain. Thus, Cadillac’s posh “compact” was a good performer as well as a styling leader, as rewarding to drive as it was pleasing to look at.

The durable monobloc V-8 would go to war, powering the U.S. Army’s M-5 and M-24 tanks that would mean so much to the Allies. Hydra-Matic, an exclusive Cadillac option new for 1941, also saw action in these tanks. Engineer Harry Barr would later recall that the transmission was very serviceable right from the start, and the improvements resulting from four years of military service would make the postwar versions even better.

Things changed considerably for the Sixty-Special Cadillac during the fifties and sixties. Find out why this special car lost some of its appeal (and value) during this time. 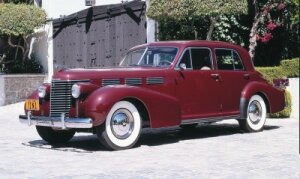