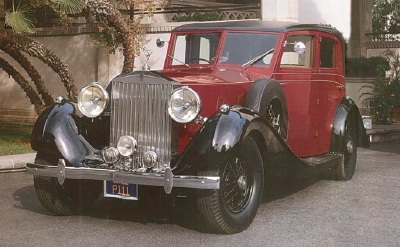 Writing about the Rolls-Royce Phantom III Touring Limousine in Automobile Quarterly in 1979, Stan Grayson described it as "the most innovative and mechanically lavish of prewar Rolls-Royce cars." It would be difficult to argue the point.

Where the Phantom II had been powered by a six-cylinder engine, the "PIII" joined the growing circle of exclusive cars around the world with V-12s. Though a beam front axle had been good enough for its predecessor, the Phantom III was graced with a double-wishbone independent suspension. A Bijur centralized lubrication system served numerous points on the chassis. Built-in hydraulic jacks "made it possible to change a tire without requiring the passengers to disembark," as Grayson pointed out. The brakes derived a power assist from a servo driven by the transmission.

The new engine was a 60-degree under-square design that displaced 448 cubic inches. Its block and heads were made of aluminum, and the overhead valves were hydraulically actuated (though there would be a switch to mechanical lifters in 1938). Breathing through a two-barrel carburetor and firing each cylinder with twin spark plugs, the Phantom III engine generated an estimated 180 horsepower at 3,650 rpm.

The front suspension was inspired by Cadillac's then-new design. However, Rolls-Royce employed horizontally mounted helical springs and hydraulic shock absorbers encased in oil-filled housings. Shock damping could be controlled from settings on the steering wheel hub.

First shown at the Olympia Motor Show in London in late 1935, the Phantom III was produced until July 1939. Of the 70 sent to North America, 18 received wood-framed, alloy-skinned bodies by J. S. Inskip, Rolls-Royce's distributor in New York. A complete car could leave the Inskip shops priced a little bit on either side of $20,000.

The mostly original car seen here is one of the Inskip-bodied PIlls. Classified as a "five-passenger sedan'" it nonetheless includes twin divider windows and two folding jumpseats.