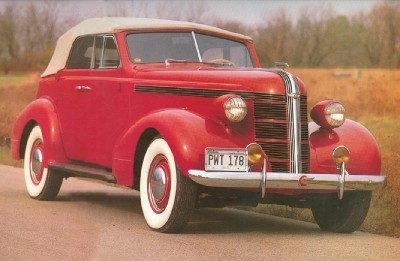 The 1937 Pontiac DeLuxe Eight Convertible Sedan, boasting an all-steel body, was an impressive option in the medium-priced automobile market.

In the beginning, there was Oakland, a pioneer automaker founded in 1907 and absorbed by the fledgling General Motors empire the next year.

Oakland prospered, only to falter in the 1920s, which led to a less expensive companion model, the 1926 Pontiac Six. It was so successful that it rendered its "parent" superfluous by 1931.

Pontiac got a straight eight and independent front suspension for 1933. In 1935, Pontiac adopted the all-steel "Turret Top," reintroduced a six-cylinder engine, and added a styling trademark that would endure through 1956 -- the famed "Silver Streak" hood and deck stripes that gave Pontiac instant identity.

The 1935-1936 Pontiacs sold well; 1937 looked even better as Pontiac moved up to the GM B-body used by Olds, Buick, and LaSalle. The all-new body boasted all-steel construction.

Impressive also was the straight-eight engine, which was stroked to 248.9 cubic inches, the size it would be until 1950.

The horsepower increase from 87 to 100 resulted in a top speed of 86 mph and 0-60-mph times of about 19 seconds, according to The Autocar, a British motoring magazine.

With the straight-eight engine, horsepower increased to 100.
credit

All in all, the new Pontiac looked "more important," a decided advantage in the highly competitive medium-price field.

At the beginning of the model year, Pontiac listed seven DeLuxe Sixes and seven DeLuxe Eights, the latter on a 122-inch wheelbase, up six from 1936.

They were joined at mid-year by a woody wagon (Six) and a Convertible Sedan (Six and Eight).

At $1,235, the DeLuxe Eight Convertible Sedan was the costliest model in the lineup (prices started at $781); at 3,505 pounds, it was also the heaviest. And to most eyes, it was easily the most elegant.

By comparison, Ford's ragtop sedan featured an 85-horsepower V-8, rode a 112-inch-wheelbase, and weighed 2,861 pounds -- all of which made it faster off the line, but not nearly as comfortable. It sold for $859.

The Pontiac, which was billed as "America's Finest Low-Priced Car," cost almost 50 percent more. It wasn't really low-priced, of course, but many thought it quite "fine."

Only 1,266 1937 Pontiac Convertible Sedans -- Six and Eight -- found buyers, about one-quarter as many as chose the Ford, so they were rare when new -- and almost never seen today, even at shows.