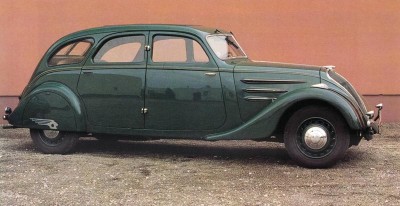 The 1937 Peugeot 402 Limousine appeared two years after the "first modern automobile" and no less than 47 years after Peugeot's first car.

That was built in 1889 by Armand Peugeot, part of the long-established French family that had made its fortune by developing the process for cold-rolled steel (in 1810), then turned to making metal goods encompassing clock springs and coffee mills, hand tools and corset stays. Armand was something of an "eccentric," but he'd studied engineering, and in 1885 he took the family name into bicycle-making, which continues today as a separate, thriving business.

As an early, avid "automobilist," Armand was eager to build cars. But though his first, a three-wheel steamer, proved reliable in a Paris to Lyon run, he quickly turned to gasoline-powered cars, engineered with assistance from friend Emile Levassor. The choice proved correct, and Armand's firm grew swiftly, selling a mere five cars in 1891 but some 300 by the turn of the century.

The Peugeot name soon graced a wide variety of cars, from "one-lung" runabouts to imposing 7.0-liter four-cylinder tourers and even one six-cylinder monster with over 600 cubic-inches displacement. But not all of these were Armand's doing, for the bicycle branch of the family had entered the infant auto business under the name Lion-Peugeot.

Racing was a Peugeot passion from the first, and the combined firm continued the tradition by racking up many notable successes: outright wins in the 1912 and 1913 French Grands Prix, second-place finishes at Indianapolis in 1914 and 1915, outright Indy victories in 1916 and 1919.

But these came with big, powerful machines even as Peugeot sales increasingly relied on small four-cylinder "cycle cars," beginning with the popular Bebe of 1911 and its post-World War I successor, the Quadrilette.

Mainstay 1930s models comprised the four-cylinder 201, replacing the Quadrilette in 1929; the larger, more powerful 301 and 401 of 1932; and the six-cylinder 601, announced in 1935. By mid-decade, Peugeot had adopted independent front suspension and even offered a novel cabriolet with an electrically retracting metal hardtop -- an early precursor of Ford's mid-1950s Skyliner.

The 402, which replaced the 401 in late 1935, marked Peugeot's first fling with "streamlined" styling, then sweeping the auto industry worldwide. Though its general shape seems patently Airflow-inspired, the streamlining itself was probably more a response to Citroen's equally smooth front-drive Traction Avant, another 1934 newcomer.

The rear-drive 402 used an overhead-valve inline four typical of period French cars. With 65 horsepower and a three-speed Cotal manual gearbox (like Citroen, an automatic transmission was planned but never offered), the 402 could reach 75 mph, helped by a drag coefficient of close to 0.35 -- excellent even today.

Our featured 402, a 1937 Limousine (French for sedan), resides in Peugeot's own museum next door to the firm's main factory at Sochaux, near the Swiss/German border. Despite its Airflow looks, it's every inch a sturdy, reliable Peugeot -- an Art Deco automobile with the heart of a lion.