In a November 19, 1937, sales bulletin introducing the new 1938 Studebaker K-5 Coupe-Express, a statement attributed to vice president George D. Keller said, "The Coupe-Express, introduced by Studebaker last season, promptly established itself as the most outstanding commercial car on the market. Its beauty, performance, ease of handling, and adaptability fully bore out its designation as a new type, two-purpose vehicle."

From this, we can gather that Studebaker was pleased with the sales. The relatively high price of the Coupe-Express was its major liability. A standard Ford or Chevrolet could be purchased for roughly 20-25 percent less. There is little question that the Studebaker was a higher-quality vehicle, with superior styling and amenities, but for a nation not yet completely recovered from the Great Depression, the additional cost was a major factor in steering many buyers elsewhere.

Nineteen thirty-eight represented a year when many automakers introduced new bodies, Studebaker among them. It was also the year that the famous French-born industrial designer Raymond Loewy was first credited with a Studebaker design. (Fashion expert Helen Dryden was given credit for the interiors, though some feel her contribution may have been limited to the selection of fabrics and colors.)

In what some consider a rather uninspiring year in general for auto styling, Studebaker was more than pleased to accept the award for "Best Designed Car of the Year" from the Magazine of Art.

Of course, Studebaker's sales promotion department attempted to exploit this honor to its fullest with one of its biggest advertising campaigns ever. Despite its best efforts, however, Studebaker sales for the year dropped to 41,504, down from more than 70,000 the previous year. The reason for this had nothing to do with faulty engineering, design, or customer dissatisfaction, but that 1938 was simply a dismal economic year.

Despite its significant decline in sales, however, Studebaker actually increased its market share from 1937 to 2.19 percent, since the rest of the industry was hit badly, too.

Interior appointments of the 1938 Coupe-Express were nothing short of luxurious when compared to the competition. Of course, passenger-car refinements prevailed and this meant that gray flat-cloth upholstery was standard, with leather fabric available at no extra charge. For those who preferred to go first class, genuine leather was available in black, dark blue, or tan for $16 extra, or in medium maroon, light gray, light green, or light red for $29.50.

The instrument panel was completely redesigned, with gauges conveniently clustered in front of the driver and easily viewed through the 18-inch three-spoke wheel. By the way, the instrument panel design for '38 was the same on all passenger cars, which was not the case in previous years.

The dash was perfectly symmetrical, which not only added to visual appeal, but also made it a simple matter to convert to right-hand controls for the overseas market. Also, clear Lucite covered the instrument cluster. Studebaker was probably one of the first to use this material.

Other standard amenities on the K-5 either not available or offered as extra-cost options on other trucks included the extra windshield wiper, Hancock rotary door latches, vent wings, armrests, adjustable seat, and built-in defroster outlets. Then, too, there was a long list of extra-cost accessories, many not available on any other trucks.

The shape of the truck cab for 1938 was distinctively different than its predecessor. For more on the 1938 Coupe-Express's chassis, continue to the next section. 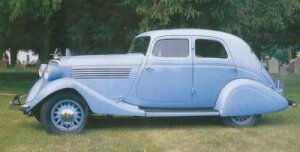