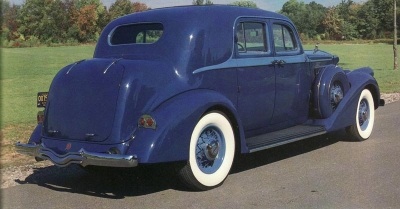 was one of the  last cars the company built before disbanding in 1938. See more pictures of classic cars.

Unlike so many other luxury-car makers, Pierce-Arrow was still building cars in 1936 like the 1936 Pierce-Arrow Eight Model 1601 Sedan, though the health of the company wasn't good. One of the famed "Three Ps" of American automotive royalty -- along with Packard and already-defunct Peerless -- the venerable Buffalo, New York, automaker was fighting for its life.

Pierce-Arrow had come under Studebaker's wing in 1928, but a group of Buffalo-area businessmen and bankers bought the firm for $1 million in 1933 -- and went bankrupt in 1934. Another million was raised, and a newly reorganized Pierce-Arrow Motor Corporation began operations in May 1935.

Despite a threadbare budget Pierce managed an attractive redesign for 1936. Advertised as "The World's Safest Car," it boasted more than 30 notable advances: more fashionably rounded lines with a built-in trunk on sedans; standard vacuum brake booster; added cruciform frame member; engines moved farther forward; and a steering box mounted ahead of the front axle with a trailing drag link.

The handsome two-tone blue Pierce-Arrow seen here belongs to Richard and Linda Kughn, of Chesterfield, Michigan. Even though it was built during Pierce's final financial decline, it maintained the high standards for which the marque was well known and respected, and the Classic Car Club of America accords it full "Classic" status.