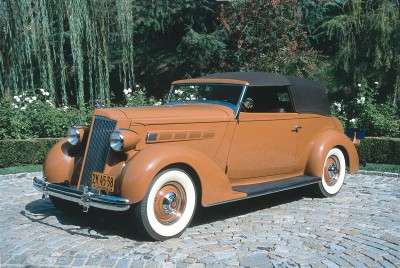 Packard was on the ropes in 1934, but by ’36 it was paying healthy dividends. The reason was the medium-price One Twenty, which includes the 1936 Packard One Twenty LeBaron Convertible Victoria.

The luxury car market evaporated in the Great Depression and Packard needed an affordable mass-produced car to survive. Prices for “junior” One Twentys started at less than $1,000, while the “senior” Packards started at well more than $2,000.

Thousands who had always dreamed of a Packard from afar could now afford one, and 10,000 orders were placed before car was even in the showrooms. Twenty-five thousand were sold during introductory model year 1935.

The One Twenty looked like a Packard with ox-yoke grille, red hexagons on the hubcaps, and dignified styling. Interiors were upholstered in wool broadcloth or leather. Built on a generous 120-inch wheelbase (hence the name), it was powered by a smooth-running straight eight putting out 110 bhp. Horsepower increased to 120 for ’36 -- good for a top speed above 90 mph.

A modern assembly line was installed for the One Twenty. In 1936, half of Packard’s work force crafted only 5,985 senior Packards, while the other half assembled 55,042 One Twenties. In spite of mass production, the One Twenty was a well-built car with quality that was never an embarrassment to the company’s lofty reputation.

The car shown here has a one-of-a-kind custom Victoria convertible body by LeBaron. The Victoria was a factory bodystyle for senior Packards but was not available for One Twentys. LeBaron went the factory Victoria one better by having a three-position top, which offered the option of driving with the roof erected over the back seat only.

While factory bodies were steel, the LeBaron was aluminum. Most Packard custom bodies were mounted on a senior chassis, but the president of American Tobacco chose a One Twenty chassis. By choosing the junior chassis he got independent front suspension and hydraulic brakes a year before they were available on senior Packards.

This car was later owned by actor Edward Herrman, and its restoration was the subject of a History Channel show. When photographed, it was owned by Ray Scherr of Westlake Village, California.