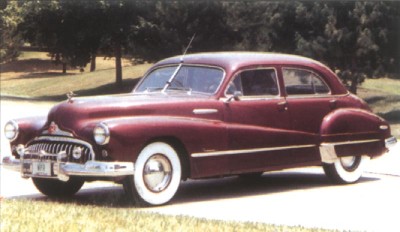 The 1948 and 1949 Buick Roadmaster introduced a couple of new features designed to help Buick distinguish itself from the competition. The big news during these early postwar years was the 1948 introduction of Dynaflow, the industry's first passenger car torque converter transmission. Optional at first only on the Roadmaster, it was popular from the start, despite the considerable slippage that occurred during acceleration (prompting some people to call it "Dyna-slush").

By 1949, Dynaflow was standard equipment in the Roadmaster, optional at extra cost in the Super series. A slight increase in the compression ratio raised the horsepower to 150, in order to help compensate for performance lost via the torque converter.

Roadmaster and Super models were completely restyled that year, for the first time since before the war. The Roadmaster's wheelbase was cut from 129 to 126 inches, and overall length was correspondingly reduced, but these were still big, heavy cars -- 65 pounds heavier, in fact, than their 1948 counterparts.

The 1948 Roadmaster Estate Wagon was far rarer -- and now more highly coveted -- than other models.
PIL

It offered, according to Buick, "...the racy look of a convertible with the suave and solid comfort of a fine sedan." Some Rivieras also sported a chrome "sweepspear" that curved downward as it moved back, and then kicked up at the rear wheelwells. This styling device would be used through 1958 in one form or another.

It was also on the 1949 models that Buick first introduced "VentiPorts," better known in some circles as "mouseholes" or "portholes." Four were displayed on each of the Roadmaster's front fenders, three on the Super series. Buick claimed that the VentiPorts helped ventilate the engine compartment, and indeed they did, but only through the early part of the 1949 model year, after which they were plugged.

Truthfully, they were strictly a gimmick, first seen on Buick styling chief Ned Nickles' own 1948 Roadmaster. Nickles, who was endowed with a well-honed sense of humor, installed amber lights behind his car's mouseholes, wired them to the distributor to flash on and off, suggesting a flaming exhaust. Harlow Curtice ordered the device to be installed on the 1949 cars, but without the flashing lights.

Despite all-new styling, production of the 1949 Roadmaster convertible dropped to 8,244 units.
PIL

Buick was really rolling now, with output reaching record levels. The Roadmaster accounted for 26.8 percent of production, a remarkably high proportion in light of its price -- Buick's Series 70 cost only $161 less than the highly advanced Series Sixty-One Cadillac.

But despite their popularity with the public, the 1949 Buicks received their share of criticism. Two characteristics drew most of the fire: the sluggish performance of the Dynaflow automatic, which tended to leave the Buick driver behind the pack when the traffic light turned green, and the ultra-soft suspension, which provided a billowy ride but did dreadful things to the car's handling qualities. Motor Trend commented that "it heels over in turns like a marshmallow."