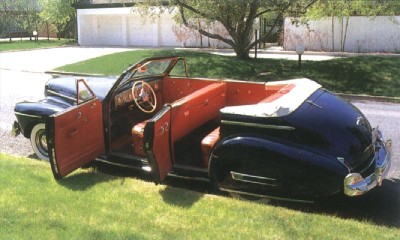 The convertible phaeton was in its last year in 1941.
PIL

Styling changes for the 1941 Buick Roadmaster were limited to differences in trim, but the effect was very attractive. Four body styles were listed: sedan, sport coupe, convertible coupe, and a smart convertible phaeton that was fated to be dropped at the end of the model year.

A handsome new fastback Century, priced $76 (about 5.5 percent) below the Roadmaster, evidently cut into the latter's sales that year. Production fell to 15,861, which amounted to just 4.2 percent of Buick's model year total.

Styling aside, the most important changes to the 1941 Roadmaster (and all the larger Buicks) were to be found under the hood. Charles Chayne and his crew had undertaken once again to squeeze some extra power out of the 320.2-cubic-inch engine -- with mixed results. They got the power, all right, but at a price.

Four major changes were made to the powerplant. First, the compression ratio was raised from 6.6:1 to 7.0:1. Second, the "turbulator" pistons were redesigned, in the expectation that detonation would thus be eliminated or at least reduced. Third, 10-mm spark plugs were substituted for the previous 14-mm type. And fourth, something called Compound Carburetion was introduced. Forerunner of the modern four-barrel pot, this arrangement consisted of twin two-barrel carburetors. The forward unit operated full time, while the rear one came in on hard acceleration.

Dealers must have been delighted, initially, to learn that as revised, the engine developed 165 horsepower. With five more horses than the senior Packards, 15 more than Cadillac, and 25 more than the biggest Chryslers, it was the industry's most powerful production engine. Buick claimed a top speed of 101.9 miles per hour for the Roadmaster, and acceleration from 5-60 mph in just 11.84 seconds.

But then troubles began to appear, New honing techniques left the cylinder walls so smooth that the rings wouldn't seat. The tiny spark plugs, developed by General Motors' AC Spark Plug Division, were prone to fouling. Further, the new compression ratio was so high that despite the redesigned pistons, excessive pinging was experienced.

Finally, the Compound Carburetion stimulated further the appetite of an already thirsty engine. When World War II came, bringing with it gasoline rationing (four gallons a week was the basic allotment), most owners blocked off the rear carburetor as an economy measure.

Other popular modifications included a thicker cylinder head gasket, which effectively lowered the compression ratio, while dealers were kept busy machining out the spark plug holes to accept 14-millimeter plugs.

To find out how the Roadmaster fared just before, during, and in the years following World War II, continue to the next page.