The Roadmaster name bowed in the 1936 model year, and Buick was encouraged by the response -- more than 17,000 were called for. See more classic car pictures.
PIL

Roadmaster! The very name conjures up images of a big, powerful highway locomotive -- which is just what Buick intended. And that's just what the Buick Roadmaster really was from 1936-1958 -- and again to a considerable degree, for 1991 and 1992.

The first of the breed was introduced in 1936, a year when Buick's straight-eight engines were heavily revised. Two sizes of this valve-in-head long-stroker were offered: a 233-cubic-inch, 93-horsepower job for the Special, and a big, 320.2-cubic inch, 120-horsepower number for the three larger series.

To put these numbers in context, compare the senior unit with the new mono-block V-8 introduced that year by Cadillac. The Cadillac's displacement came to 322 cubic inches, from which 125 horsepower was generated, so in terms of displacement and power there wasn't all that much difference between those two great powerplants.

The "three larger cars" were the Series 60 Century, Series 80 Roadmaster, and Series 90 Limited. All 1936 Buicks looked dramatically different from their 1935 counterparts, and their new series names would soon become well known. The Roadmaster was a big car, riding a wheelbase of 131 inches -- seven inches shorter than that of the huge Limited, but nine inches longer than the Century. In sedan form, this newcomer tipped the scales at 4,098 pounds, some 88 pounds heavier than Cadillac's new Series Sixty.

Pricewise, the Roadmaster was a phenomenal bargain. The sedan sold for $1,255, undercutting the least expensive Cadillac by $440. Or for those who wanted something sportier, there was a four-door convertible phaeton, priced at $1,565 (and of which only 1230 were built). The big ragtop may have been the greatest bargain of all, for the only other General Motors cars then being offered in that exotic body style came from Cadillac, at prices ranging from $2,745 to $7,850.

Having totally restyled its entire line for 1936, Buick might have been expected to relax a bit during 1937. But the division had been through a rough period, falling from third place in the 1926 sales race to eighth in 1933, so it had some catching up to do. By 1936, Buick had moved back into sixth rank, but that wasn't good enough for Harlow Curtice, Buick's recently appointed general manager.

So the 1937 line was restyled once more. And as attractive as the 1936 cars had been, the new ones looked even better. The Special's straight eight was stroked to 248 cubic inches, and although the displacement of the larger engine remained unchanged at 320.2 cubic inches, a new carburetor and revised camshaft raised its output to 130 horsepower.

A formal sedan, featuring a roll-down glass partition between the front and rear compartments, was added to the Roadmaster line for $1,641, but the price of the Series 80 sedan was raised to $1,518, a whopping 21-percent increase. 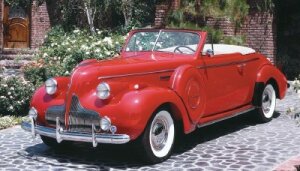