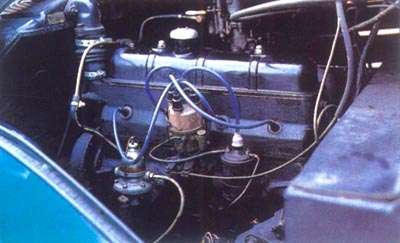 Two other fantastic projects remained in the prototype arena: an even more aerodynamic streamliner, and a modern V-8 for the 1935 Peugeot engine.

While developing the new four that went into the 402, Peugeot also designed a V-8; at first an L-head, but later with overhead valves.

This engine was considered for a more luxurious sedan with the same body as the 402, but with a modified nose and grille. Perhaps, predictably, it would have been called the 802. But due to the ominous political situation in Europe, it never got past the point of some nice drawings and perhaps a clay model.

Another sensational car did become a reality, the radically streamlined 402 sedan designed by Jules Andreau. For some time, Andreau had been working on aerodynamic automobile designs. In 1933, he showed some extraordinary prototypes with fishtail bodywork. Then the streamlined Peugeot 402 gave him the basis for a new project with all-around wind-formed lines.

The result appeared at the 1936 Paris Motor Show, a breathtaking car with one mighty fin -- and a sealed hood. The stillborn V-8 was supposed to go there. In the end, Peugeot produced six Andreau cars with normal 402 mechanicals for sale to special clients.

Even with its avant-garde looks, the 402 quickly became established. The car's reliability and economy won over skeptics. The coach and soft-top convertible were made until summer 1937.

A new six-seat version of the Eclipse also came out, replacing the three-passenger version. To keep the price reasonable, the top became manually operated. It was necessary to switch this new convertible to the long chassis of the Familiale sedan in order to contain the enormous roof in the trunk.

As a space-saving move, a flat, one-piece windshield replaced the original Eclipse's veed windscreen, which did away with the pointed forward edge of the roof panel. This "metal convertible," as Peugeot called it, would go on to be one of most sought after cars to come from Sochaux. In October of that year, the Commerciale utility sedan adopted the longer wheelbase and the nicer rear-body styling of the Familiale.