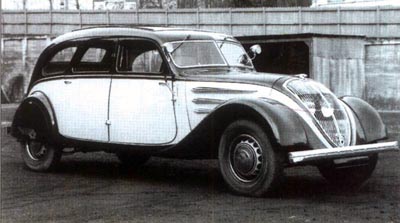 In contrast to the body construction restrictions inherent in the semiunitary Airflows, the 1935 Peugeot 402 lineup's body-on-frame chassis allowed for more variety of body styles. When the new Peugeot was unveiled in Paris in October 1935, there were no less than eight different models.

On the standard 124-inch-wheelbase chassis there was the four-door sedan; the "Coach," a six-passenger coupe with a one-piece backlight; a convertible; a three-seater roadster with a folding one-piece windscreen and a rumble seat in which two more persons could sit; and a utility sedan dubbed the "Commerciale." The Commerciale had a two-piece tailgate for easy loading of its flat cargo floor, but it came without fender skirts.

The absolute sensation, however, was the "Eclipse," a three-seat convertible with a metal roof that could be electrically retracted into the car's very long tail. Based on plans by a Peugeot-enthusiast dentist, Georges Paulin, such convertibles first appeared in the 601 series beginning in 1934. Peugeot claimed it took just 15 seconds to stow the top and that the system's reliability had been proven in 20,000 tries on the prototype.

The remaining models were mounted on a 130-inch wheelbase. They included an eight-passenger sedan called the "Familiale" and a purpose-built taxi with sunroof and sturdier bumpers. (The taxi was available only for a year because cab drivers came to prefer the regular 402 for their work.)

Aside from the 402, there was something else of note on the Peugeot stand at the 1935 Paris show, something that seemed to be so unbelievable that a cutaway model of it was displayed to explain it further: the world's first fully automatic transmission.

Gaston Fleischel, an Alsatian engineer born in 1885, designed the device specifically for the new streamlined Peugeot. His numerous patents, which dated back to 1927, would influence the development of automatics built in America where, with much more powerful cars and greater production volume, the automatic transmission would find more ready acceptance after first appearing as an option on 1940 Oldsmobiles.

At Peugeot, however, only prototypes of Fleischers handiwork were produced. The big factor was cost: 6,000 francs ($910) for the transmission was too much when the price for a whole car was listed at 22,900 francs ($3,465).

A more successful option was a four-speed electromagnetic Cotal gearbox shifted via a small lever attached to a control box on the steering column. There was still a lever in the dash, but it served only to put the car in or out of reverse gear. This transmission was functional and affordable -- costing only 2,500 francs ($380) -- and found favor with Peugeot customers.

To learn about the engine the powered the 1935 Peugeot 402, continue to the next page.