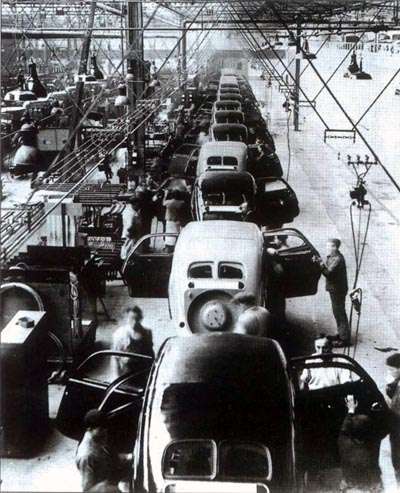 The Peugeot factory in Sochaux, France, hums with the activity of 402 assemblies.

Since 1930, Peugeot had begun labeling its models the 201, 301, 401, and 601. When the new 1935 Peugeot 402 was introduced at the Paris Auto Show in the Grand Palais, it was recognized that the choice of the final digit represented the beginning of a quite different generation of passenger cars.

To the enthusiastic French motoring public, Peugeot's change to the streamline design seemed to be a new landmark. On the surface, nothing appeared to be in common with the older models, which were becoming quite dated by this time.

Still, there were some important tried-and-true elements secreted under the stylish 402 body. The low stance may have reminded some of Citroën's unit-bodied front-wheel-drive car, but the Peugeot was mounted on a conventional -- albeit newly designed -- rear-drive chassis. And rather than adopt hydraulic brakes, the 402 perpetuated the use of cable-actuated mechanical units.

But these were the only conventional components used. A brand-new, 55-horsepower, 2.0-liter, four-cylinder engine with overhead valves went into the 402. Also new was a synchronized three-speed gearbox. Front wheels were independently suspended. Leaf springs were self-lubricating.

At approximately 16 feet long, the 402 wasn't exactly small. But even with only a four-cylinder engine (in contrast to the inline sixes and eights used in the various Airflows), it was efficient enough to attain a top speed of around 70 mph.

There was one more thing Peugeot did well: While the styling of the Airflow looks more sturdy, the 402 looks quite more elegant. With a particularly French sense of style, Peugeot composed its own variation on the aerodynamic theme. This was unique among European automakers.

Even the decorative trim was deserving of attention, especially those details that referred to Peugeot's longstanding leonine emblem. A magnificent, stylized lion's mane waved at the fender skirts. The lion's-head radiator mascot not only identified the 402 as a Peugeot, but it performed a function; turnable, it served as the hood release lever.

The 1935 Peugeot 402's headlights were put behind the sloping grille shell.

And, of course, there's no ignoring the unusual, side-by-side headlamps positioned behind the sloping, reverse-teardrop grille. With a 12-volt electrical system (a pair of six-volt batteries were included), the light they generated was remarkably effective.

Art Deco style appeared in the design of the symmetrical dashboard. Beneath the junction of the two angled windscreens, the gearshift lever stuck out from the central part of the dash. (Shift action was cable-directed, not via direct linkage.) In the 402, the handbrake lever also left its usual location on the floor for a place on the dashboard, another touch in common with the Airflow.

With no floor shifter, the front bench -- framed with trendy chromed tubing, a trait shared with American streamliners like the Airflow and Lincoln Zephyr -- was a genuine three-seater. Maroon velour fabric for seats and inner door panels harmonized with brown bakelite for control buttons.

A single circular dial housed all the gauges the driver needed to see; on the opposite end of the dash panel there was a provision for a radio -- a true rarity in European cars of the time.

A special multiple-function button in the steering wheel hub operated the complete lighting system and the dual-tone horn, too. As an option, customers could get a heater/defroster with a metal dash-top duct painted in the same café au lait shade as the rest of the instrument panel.