The Studebaker Land Cruiser at the World's Fair 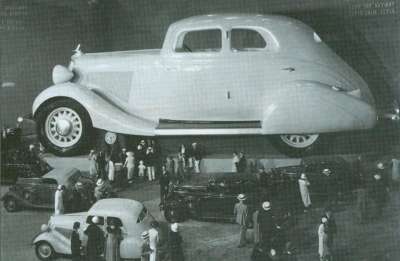 A mammoth rendition of the Land Cruiser towers over fairgoers in Chicago at the World's Fair in 1934.
©2007 Publications International Ltd.

The Chicago World's Fair, or more correctly the Century of Progress International Exposition, was held on the city's beautiful lakefront in 1933-34. Its purpose was to commemorate the 100th anniversary of the city's incorporation and, more importantly to provide jobs and recreation for a nation mired in a deepening depression. Planning for the event began in the late Twenties; Studebaker signed on to participate in August 1931.

At that early date, no one was sure exactly what form the display would take.

Whatever it was, it had to be sensational, since all the major auto companies would be represented and each would be trying its best to outdo the others. Of course, Studebaker could display some very impressive vehicles from the company's museum. It had the carriage in which Abraham Lincoln rode to Ford's Theater on the night of his assassination, and another in which the Marquis de Lafayette toured the U.S. during his visit in the 1820s, as well as many other historically significant vehicles.

What the company finally decided upon, however, had nothing to do with museum vehicles. Instead, it would construct the largest automobile ever built. The idea was inspired by another large Studebaker built in the late spring of 1930 to commemorate Studebaker's remarkable records of speed and endurance.

The car chosen was a 1931 President Model 80 Four-Season Roadster. It was constructed of wood and measured 41 feet long, 13.5 feet high, 15 feet wide, and weighed 5.5 tons. It was built over a three-month period by 60 craftsmen in Paul Auman's experimental body department. The car was originally used as a prop for a movie short entitled Wild Flowers in which 22 members of the Studebaker Champions orchestra were accommodated in the driving compartment of the car. After the completion of the film, the car was disassembled and moved to a prominent knoll at the company proving grounds along busy Indiana Highway 2, seven miles west of South Bend.

Wanting to publicize its newest and most-luxurious model at the Chicago fair, the company decided to erect an immense representation of the President Land Cruiser. Though this giant car would have wooden framework, the exterior was made of plaster, and its completion represented a masterpiece of furring, lathing, and plastering. So accurate and authentic was the model that visitors would scratch at the surface with their fingernails to test the composition.

The giant Land Cruiser, which reposed in the great hall of the Travel and Transport Building, was 80 feet long, 28 feet high, and 30 feet wide. The running boards were 21 feet in length, the windshield wiper three feet, and the tires 12.5 feet For maximum "eye appeal," it was painted Canary Yellow, a color later made available on production cars for an extra $80. Below the running board was a door that led visitors into an auditorium that could hold 80 guests. Films were shown that extolled the virtues of the new Studebakers and told, in dramatic fashion, how Studebaker had set more than 140 records for speed and endurance.

Of course, a full line of normal-size Studebakers (some painted in Canary Yellow) were on display in the open foyer in front of the giant car. Directly to the left, large crowds gathered to watch craftsmen from Chicago's National Products Company cast 6.75-inch-long models of the Land Cruiser from molten metal. Each one had the words "Replica of Giant World's Fair Studebaker" embossed on the decklid. One could also buy a seven-inch-long Studebaker dual-wheeled stake-bed truck. The car was available in a variety of colors and the truck in red-both for the princely sum of 25 cents.

Not long after the colossal car was completed, Studebaker announced its new "Year Ahead" model with its horizontal hood louvers. To keep in tune with the production cars, the giant fair car was modified to reflect the changes, as were the pot-metal miniatures with white rubber tires. The detail and finish were quite good for the era and the popularity of the promotion led Studebaker to continue the practice in succeeding years. A 1935 model of the Land Cruiser was also done by the same firm and the decklid inscription read "Studebaker" or "Studebaker Miracle Ride." These were offered to dealers for 15 cents each.

This writer has often wondered whether the commissioning of the miniature cars by Studebaker at the fair represented the first use of promotional models. Certainly there had been toy cars and trucks built prior to 1934, but were any of these built to the accurate specifications required by Studebaker, and did any receive corporate sanction? If not, we can chalk up another industry "first" for the firm.

Studebaker reaped a tremendous amount of positive publicity from its participation in the exposition. At its conclusion, the big Land Cruiser was dismantled, but many of the thousands of miniatures have survived and remain in the hands of collectors. As for the outsized 1931 President that inspired the fair exhibit, it survived until the spring of 1936, when it was set afire on orders of the company president.

On the next page, learn about the Studebaker's career on the racetrack.