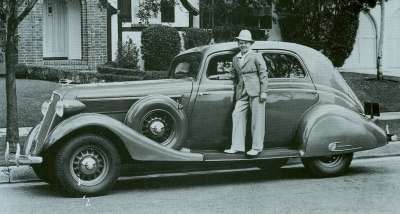 The 1935 Studebaker Land Cruiser had a tough act to follow. The 1934 model year was an unusually long one at Studebaker, extending from October 1933 through early November 1934. Total sales of all passenger-car models amounted to 61,180 units compared to 26,886 (including Rocknes) for the previous year.

This allowed Studebaker to jump from 10th to eighth place in total registrations, being one of only four companies to improve its position in that Depression year. This gain in position, significantly enough, was achieved while reorganization was pending and the business was technically in charge of the courts. This success was due principally to two important factors. First was the aggressive corporate advertising campaign advanced by Hoffman, and second the loyalty of the dealers, who for the most part remained steadfast in the Studebaker camp despite the receivership.

Since the Land Cruiser was a mid-model-year introduction, and since it was the most-expensive car in the lineup, it was not expected to be a big seller. Production records indicate that only 841 were built, broken down as follows: Dictator 407, Commander 233, and President 201. This amounted to just 1.4 percent of the company's passenger-car production.

Despite this, company executives opted to offer the Land Cruiser as part of the new 1935 line. The big news at Studebaker for '35 was the adoption of independent front suspension. Unlike the coil-spring type introduced by some companies in '34, it consisted of a transitional spring that did away with the conventional axle. Studebaker called this new engineering breakthrough "planar suspension" and it was standard equipment on the President and Commander lines and optional on the Dictator. In various forms, it survived through 1949 on Studebaker cars.

Only relatively minor styling changes were made for '35, though these altered the overall appearance to a remarkable degree. The new radiator shell had a narrow vee-shaped sloping front with sides that curved backward and outward to meet the hood lines. The side sections of the tall vertical shell were composed of horizontal fins, which, at the top, represented an extension of the horizontal hood louvers.

The Commander and Dictator had a chromium radiator mascot consisting of a flying goose inside a large oval. The President utilized a graceful lady standing tall with flowing hair. Body offerings, including the Land Cruiser, remained virtually unchanged from the previous year.

On the next page, learn the fate of this influential Studebaker.