The Design of the 1934 Studebaker Land Cruiser 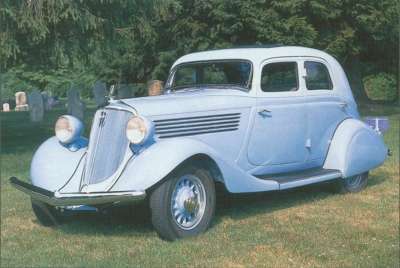 There can be no doubt that the design of the 1934 Studebaker Land Cruiser was inspired by the Silver Arrow. Most people at the time considered it unorthodox, some extravagant, but almost all controversial. The wraparound four-piece rear window was especially unique and the fender skirts (referred to as "rear wheel shields" by Studebaker) were probably industry firsts on a mass-produced car.

While Automobile Topics magazine referred to the Land Cruisers as "one of the smart streamline offerings of the hour," Studebaker president Paul Hoffman ignored the streamlining altogether and confined his comments to the functionality of the new fully enclosed trunk.

In a company press release, he is quoted thusly: "As a result of this demand for more luggage space, we designed what can be called as the first 'Land Cruiser' -- which I believe carries more luggage space than any manufacturer has yet built into a production model. This space measures 48 inches wide, by 27 inches long, by 27 inches high. With this space available, five people will be permitted to travel great distances without the discomfort of riding with a rear compartment piled high with baggage." Indeed, few cars were equipped with built-in trunks in 1934, and from Hoffman's remarks, we may gather that he considered the matter as a choice of function over form and that aerodynamics and streamlining played little or no part in the company's decision to build the car.

It took several months before new body dies could be made at Budd (Studebaker's supplier in Philadelphia) and the car put into full production. In fact, the first production Land Cruisers were not seen coming down the assembly line until mid April. Within the intervening four months, Studebaker had introduced its new "Year Ahead" models, which were distinguished from the earlier-series cars by their horizontal hood louvers. Since quantity production of Land Cruisers began after the introduction of the Year Ahead models, it is believed that most of the 1934 production of this model would have had the horizontal louvers, though numbers are not available.

The Land Cruiser body represented the prestige car of the line and it was featured prominently in most magazine advertising, which in those years was the principal recipient of auto company ad spending. Initially, the Land Cruiser was offered only on the President chassis. Later it was made available in the Commander line, and in June, on the deluxe Dictator. Prices on these new offerings were about 15 percent higher than comparably equipped four-door sedans-enough to discourage many Depression-era buyers.