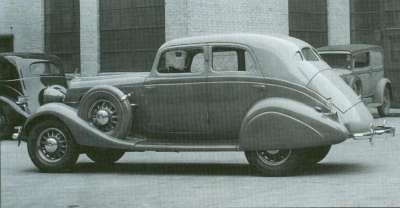 The 1934 Studebaker Land Cruise was born out of necessity. Studebaker wanted to take advantage of the enthusiasm created by the Silver Arrows, but was strapped for cash and could not hope to introduce another completely new body. Being the feisty independent, however, it relied on innovation and improvisation, two ingredients in abundance among the design team headed by the Hughes.

About three months after the '34 Studebakers made their debut, the team came up with some detailed drawings that illustrated what a dramatic change of appearance could be effected by simply taking a standard four-door sedan and modifying the body aft of the C-pillar. To view this in full size, a production model was taken off the assembly line and by the "simple" expediency of cutting and welding a few panels, reshaping the back glass, reforming a decklid, and adding some fender skirts, the look of an all-new car was created.

Hoping to create a sensation similar to what the Silver Arrow had done the previous year, Studebaker rushed ahead with the project. Again, the deadline was the New York show, which started the first week of January, To qualify for participation, it had to be completed by January 1. Paul Auman's crew in experimental body engineering was put to the test for a second consecutive year.

Work on the "streamline model" -- as it was dubbed in interoffice correspondence-didn't begin until December 14, 1933, but it was completed and shipped on the first of the new year. Entries in Auman's personal notebook reveal that it required a total of 2,164 man hours to complete, broken down as follows: wood shop, 298 hours; metal shop, 1,573 hours; paint shop, 160 hours; and trim shop, 133 hours.

By the time of the show, the "streamlined model" had been officially named the Land Cruiser. But, no matter what it was called, it couldn't fail to attract notice. According to the dealer newspaper, The Studebaker News, "[T]he Studebaker exhibit was thronged continually and was the center of attention."

To learn more about the 1934 Studebaker Land Cruiser, see the next page.