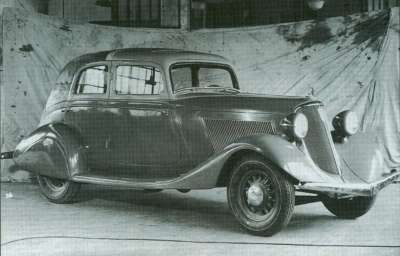 Aside from a sloping deck with an integral trunk, a four-section wraparound backlight and fender skirts were among the features that reinforced the Pierce Silver Arrow's streamlined appearance.
©2007 Publications International Ltd.

In 1928, Studebaker merged with Pierce-Arrow, and through 1933, they shared engineering and styling talent, as well as some production facilities. Pierce, however, did not lose its corporate identity and was allowed to proceed pretty much on its own with occasional guidance from South Bend.

In late 1932, Pierce vice president Roy Faulkner was approached by Phil Wright, a stylist recently released by General Motors. Wright was looking for work and presented his credentials and a 1/8-scale model of a fastback coupe that he hoped would interest Faulkner. Both Faulkner and Pierce president Arthur Chanter were impressed by the model and soon presented it and the young Mr. Wright to Albert Erskine in South Bend. Erskine was enthusiastic about the concept, but knew time and money were against them. Pierce needed something quickly to jump-start its lagging sales and he knew it would take a year or more to get a completely new car ready for full-scale production. Erskine suggested they build 10 (later reduced to five) of the new cars for the upcoming auto shows, with the first to be done no later than January 1, 1933, in time for the New York event.

The design rights were purchased from Wright and the project turned over to Studebaker chief body engineer James R. Hughes. Hughes' staff made several alterations to the original design in order to fit it on the shorter 139-inch-wheel-base Pierce V-12 chassis. (Wright's original design anticipated a 147-inch stretch.)

Once styling had completed its drawings, they were given to Paul Auman, who headed up Studebaker's experimental body department. Working around the clock for nearly three months, his staff of craftsmen created five complete bodies, mounted them on the Pierce chassis, and shipped them on schedule.

Of course, the cars created at Studebaker came to be known as the Pierce Silver Arrows and they were instantaneous crowd pleasers wherever they were shown. The cars had features years ahead of their time: fastback styling, slab sides, built-in trunk, full steel roof, enclosed running boards, recessed door handles, and flared head- and taillights. Nothing quite like them had ever been seen before. In the years that followed, several auto companies copied various features of the original Silver Arrows, but none of these ever quite compared to the original.

With the designs in place, the Studebaker Land Cruiser was ready to hit the streets. Read the next page to learn more.