Studebaker During the Great Depression 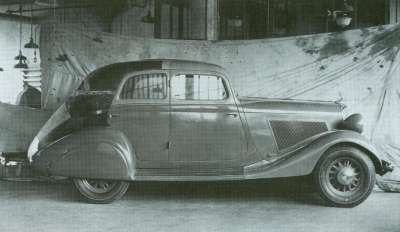 Inspired by the Pierce Silver Arrow, body engineers at Studebaker began imagining how they might add a sleeker look to their car. A standard 1934 sedan was modified by hand to try out their ideas.
©2007 Publications International Ltd.

While Studebaker's line of cars may have been out of step with the environment of the Great Depression, it would be difficult to criticize the classic styling or mechanical innovations evident on the beautiful cars made at the time. Today, the classic lines of the big Presidents are admired by many but owned by few, due to their low production.

Studebaker was also distinguished in the field of engineering and engine building. Ample evidence of this is shown by the results of the 1933 Indianapolis 500: Of the 14 cars that finished the entire 500 miles, half were Studebaker-powered -- a record for stock-block entries that still stands. Thanks principally to chief engineer Barney Roos and his able staff, Studebaker could boast of holding more speed and endurance records than all other manufacturers combined.

After Studebaker went into receivership, Hoffman and Vance realized that severe cost cutting was in order if Studebaker was to stay in the automobile business. Consequently, in mid 1933, they discontinued all racing endeavors and further economized by drastically reducing the number of models and chassis offerings for 1934. Dropped were the big 337-cid President Eight engine, the entire Rockne line, and the expensive-to-build convertible sedans. There would be only three passenger-car lines-the Dictator Six, and Commander and President Eights-and among these, there would be considerable sharing of mechanical and sheet-metal components.

The base-model Dictator was designated the Model A, rode on a 113-inch wheelbase, and was powered by an L-head six displacing 205 cubic inches that produced 88 bhp at 3600 rpm. Both the 119-inch-wheelbase Commander (Model B) and 123-inch-wheelbase President (Model C) utilized the same straight-eight engine block, though the President topped out at 250 cid, or 29 more than the Commander by virtue of a half-inch-longer stroke. Commanders boasted 103 bhp, Presidents 110.

Studebaker launched its huge worldwide advertising campaign at the start of the 1934 model year in October 1933. In doing so, it coined a catchy new slogan: "From the Speedway comes their stamina, from the Skyway comes their style." It was certainly easy to substantiate the first part of that statement. In addition to its strong finishes at Indianapolis in 1932 and '33, Studebaker held 143 national and international records for speed and endurance, utilizing a number of different models.

The "Skyway styling" was an obvious reference to the all-new bodies that Studebaker claimed "were styled directly from airplane designs." Indeed, Studebaker may have been one of the first companies to use wind-tunnel testing for its cars. Evidence suggests that as early as 1932, passenger cars were being tested at the University of Michigan and it is well documented that four of the five factory-sponsored 1933 Indy cars had all-new aerodynamic bodies that had been tested there extensively.

While Studebaker was ramping up to the design that would become the Land Cruiser, the final piece of the puzzle came when they merged with Pierce-Arrow.  Learn more on the next page.