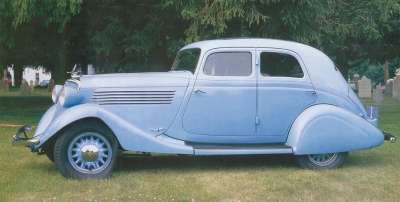 Like most automakers, Studebaker struggled during the Great Depression -- though they managed to produce some impressive cars like this 1934 Studebaker Commander. See more classic car pictures.
©2007 Publications International, Ltd.

The 1934-1935 Studebaker Land Cruiser arrived during a time of great economic turmoil for the country and Studebaker in general. With new leadership determined to bring Studebaker back from the brink of financial ruin in the early 1930s, the company gained a renewed sense of vigor. One of the first signs of that vitality was the creation of a distinctive, streamlined auto-show special. When show-goers gave the car their approval, the Land Cruiser quickly went into production and became one of Studebaker's most memorable products of the decade.

Early on the morning of Sunday, July 2, 1933, the citizens of South Bend, Indiana, awoke to read the news that Albert Russell Erskine, president of the Studebaker Corporation for the previous 18 years, had taken his own life. The man who had once boasted "we eat obstacles for breakfast" had suffered for months with ill health, both physical and financial. His carefully orchestrated death came less than four months after the company he had led to such great heights in sales and profit had fallen into receivership, the result of the country's economic collapse and poor management decisions on his part.

In its 80 years as a producer of wheeled vehicles, Studebaker had weathered many crises and through it all had never finished a year in the red-until 1932. Being one of the few companies to successfully make the transition from horsedrawn to self-propelled vehicles, it became an institution with a worldwide reputation.

That it eventually managed to survive the crisis of 1933 was almost totally the result of the perseverance and fortitude of Paul G. Hoffman and Harold S. Vance, who, as coreceivers, convinced a federal judge that Studebaker would have a better chance at paying back its creditors if it was to stay in business rather than liquidating its assets. Shortly thereafter, with the judge's consent, Studebaker began an unprecedented $100,000 advertising campaign, announcing to the world that "Studebaker Carries On." The plan worked, and within two years, the company was rescued from receivership and was again on a solid financial footing.

It seems quite remarkable that during the very depth of the Great Depression, the company would be turning out some of its most impressive and memorable vehicles. In 1933, for example, it had a passenger-car lineup that included the Studebaker Six, Commander Eight, President Eight, and Speedway President, as well as a lower-priced companion make, the Rockne.

In addition, there was a full line of medium-duty trucks, ambulances, funeral cars, and light-commercial vehicles. That Studebaker was offering four completely different chassis, more than 20 different bodies, and five distinct engines in the passenger-car line alone gives a good indication how badly Erskine had misjudged the extent of the Depression.

To learn more about how Studebaker faired during the depression, see the next page.