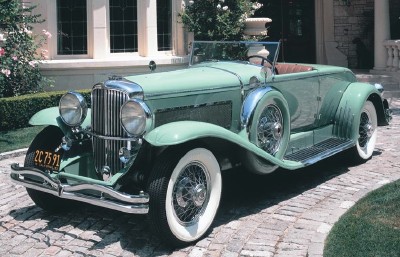 The 1933 Duesenberg Model J was both powerful and luxurious. See more pictures of classic cars.

"The ideal personal car for any man or woman. With top down it is the raciest of roadsters; with top up the sportiest of closed cars." So read the original brochure for the 1933 Duesenberg Model J.

The Murphy convertible coupe was Duesenberg's most-popular body style, with 60 built. It was also the least expensive at $13,500.

The Walter M. Murphy Company, of Pasadena, California, was an auto dealership that branched out into coachbuilding in the 1920s. Californian tastes were less conservative than those in the rest of the country, and Murphy catered to its market.

The firm had several talented designers on its staff, particularly Franklin Hershey, who designed the first Ford Thunderbird; Phil Wright, who created the Pierce Silver Arrow for Chicago's "Century of Progress" World's Fair; and Frank Spring, who would head Hudson's styling department.

Duesenberg, meanwhile, set out to build the world's most powerful and opulent cars. It was natural that it would tap Murphy to supply custom bodies.

Although built in a series, each Murphy convertible coupe was different. Bodies were supplied to the Due­sen­berg factory without paint or trim. The customer could select paint, upholstery, interior hardware, and make minor variations.

Though Murphy closed in 1932, the first owner of our featured car -- who bought it as a chassis -- arranged to have a Murphy convertible body mounted, according to a vehicle history provided by the current owner.

The Duesenberg J was the most powerful American car before World War II. Its 420-cid straight eight with dual-overhead cams and four valves per cylinder put out 265 horsepower. In 1929, the first year of Model J production, 125 horsepower was about the most that could be had in an American car. Top speed for a light-bodied Duesen­berg J was 116 mph.

Monitoring the magnificent engine was an impressive instrument panel that included the usual gauges plus tachometer, stopwatch, altimeter, and brake-pressure gauge. A mechanical "computer" activated the automatic chassis lubrication every 75 miles, and a dashboard light confirmed it. Warning lights signaled the need for oil changes and battery maintenance.

Duesenberg won the Indi­an­apolis 500 three times, and chief engineer Fred Duesenberg was always looking for more power. In 1932, the SJ added a supercharger that raised horsepower to 320 and top speed to 130.

The SJ was identified by chrome external exhaust pipes. Consistent with Duesen­berg's policy of satisfying the client, the external exhaust could be ordered on naturally aspirated Js or added to older cars. Some SJ customers had the supercharger removed, but left the pipes.

This J convertible is owned by Ray Scherr, of West­lake Village, Cali­for­nia. It was restored 25 years ago by award-winning restorer and Duesen­berg expert Randy Ema.