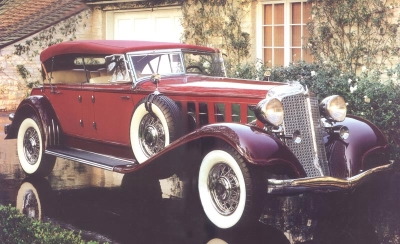 The 1933 Chrysler Imperial Custom Phaeton was the last of a line that many consider to be the most beautiful Chryslers ever. The long hood and flowing fenders of the classic era would soon give way to the advanced, but less graceful, Airflow.

The stunningly handsome Phaeton had power as well as looks, topping out at nearly 100 miles per hour.

Chrysler's 'Floating Power' engine-mounting system was added in 1932 to make a smooth-running engine feel even smoother. The perfectly balanced lines were matched by a nearly 50/50 weight distribution. This balance, along with a lower double-dropped frame (also added in 1932) gave a comfortably soft ride with stable handling. The Imperial felt smaller than its 146-inch wheelbase thanks to Chrysler's well-thought-out engineering.

This particular car is one of only 36 Phaetons manufactured in 1933.

This car is owned by Bruce Massman, of Beverly Hills, California. Mr. Massman drives the car regularly and says it feels more like a 1950s car than one from the 1930s. Restoration took more than a year and the Imperial always takes first at shows.

It is one of 151 Imperial Customs produced in 1933, of which only 36 were phaetons. A new LeBaron-bodied phaeton cost $3395 in 1933. The radiator stone guard was optional -- as were the chrome wire wheels and hood vent doors. (Painted wires and doors were standard.) While the 1932 phaeton's rear windshield was mounted on a flip-up cowl, the rear glass retracted into the front seatback for 1933.

The "Floating-Power" engine mounting system made a smooth ride even smoother.

By 1934, the phaeton was gone, but not completely forgotten. When Chrysler wanted to revive its styling reputation, it turned to LeBaron again to build another beautiful phaeton -- the stunning Newport show cars of 1940.