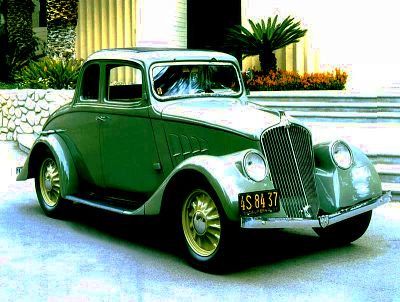 The 1933 Willys Model 77 Coupe, the car that would provide the power for the first jeep and a basis for dragsters, began as a desperate attempt to beat bankruptcy.

John North Willys retired from his car company in 1929 and was appointed U.S. ambassador to Poland. But when the Depression hit Willys' sales hard, he came back in 1932 to save the firm that bore his name. He approved the 77, a new model already in development to replace the other lines.

John Willys started as a car dealer. Among the lines he handled was Overland, and when a shipment of them failed to arrive, he went to the factory to investigate. He ended up buying the company in 1908. Willys' sharp mind and contagious enthusiasm propelled a minor bankrupt firm into one of the nation's largest automakers by 1910.

Willys introduced a car under his own name in 1914, but continued to make Overlands. By 1927, the Overland had been replaced by the small, European-inspired Whippet. Priced to compete with Ford and Chevrolet, and offering good performance, Whippet moved the Willys-Overland Company to the industry's number three position in 1928.

The Model 77 Coupe had a similar HP to weight ratio to the 1931 Packard Model 833 Sport Phaeton.

The 1933 Willys Model 77 Coupe was an improved Whippet. The flathead four-cylinder engine was strengthened and horsepower upped to 48. The frame was also enhanced and wheelbase was a compact 100 inches. The sloping hood and faired-in headlights were considered radically aerodynamic in 1933.

While the low-priced three were getting costlier and adding six and eight-cylinder engines, Willys believed that the Depression market needed an economical small car. Price for the 1933 Coupe was $395.00. Advertised mileage for the vehicle topped 30 mpg.

With a compact size and weight just over one ton, the 1933 Willys Model 77 Coupe was quick and maneuverable. A specially bodied Model 77 was successful in sportscar racing, beating not only Bugattis and MGs, but also larger engined Fords. Drag racers would later discover that the Willys was one of the lightest cars into which one could fit a full-race V-8.

In spite of John Willys' efforts, the company went into receivership. It found itself in the frustrating position of having orders that it couldn't fill until the court granted permission to build an allotment of cars. The 1933 Model 77 gradually pulled the firm out of bankruptcy in 1935, but Willys died of a heart attack just days later.

The company modified and rebadged the 1933 Willys Model 77 Coupe until World War II. The engine, again improved in power and durability was dubbed "Go-Devil." When Willys submitted its prototype for what became the jeep, it was this engine that really impressed the army.

The coupe seen here is owned by Mike Nordahl of Alta Loma, California. It has been displayed at the Wally Parks NHRA Motorsports Museum as a tribute to the 1933 Willys 77's contribution to drag racing.