Now let's consider the reaction to the 1932 Ford Model B and Model 18. With the public introduction of the 1932 Ford Model B and Model 18 looming, the press speculated about the new arrivals. The factory had nothing to say, but dealers indicated that Thursday, March 31, 1932, would be the first public showing. National, full-page newspaper advertisements (paid for by dealers) appeared on Tuesday, March 29, announcing the new Ford V-8. Two days later, more ads depicted for the first time the new V-8 engine and quoted prices ranging from $460 for the roadster to $650 for the convertible sedan. The four-cylinder Model Bs cost $50 less.

From a distance, the 1932 didn't seem all that different from the Model A, but closer inspection revealed it to be all-new from radiator cap to taillight. Edsel and all who'd helped him could rightfully feel proud, for this was far and away the best-looking Ford yet -- an opinion soon confirmed by the nation's youth, who would covet the 1932 "Deuce" for hot rodding above all other cars.

As with the Model A, the design team had taken its styling cues from the imposing Lincolns that so embodied Edsel's artistic taste. The objective had been a smaller-scale adaptation incorporating the same sculptured lines and fine detailing. And because the body design was coordinated with the new chassis being developed, the new Ford looked lower and sleeker, and in fact had a lower center of gravity for a better ride and handling.

Also heavily involved in the new Ford were body suppliers Briggs, Murray, and Budd, who fine-tuned the approved stampings in anticipation of fat production contracts.

The result was the first Ford that could boast both outstanding performance and beauty. As an impressed newsman wrote after the San Francisco preview, "In the new Ford car the eye is caught by the bright beauty of the rustless-steel head-lamps, and travels along the bead on the side of the hood toward the rear of the car [giving] the impression of an arrow in flight. The bodies are fresh and modern, from the gracefully rounded V-type [vertical-bar] radiator to the rear bumper. The convex lamps, full-crowned fenders and long, low running boards harmonize with the balance of the design."

A wheelbase extended 2.5 inches to 106 inches enhanced not only external appearance, but interior room as well. And because the rear transverse spring was relocated behind the differential, the "spring base" was 113.5 inches, allowing for both a smoother ride and a lowering of the car by 2 1/2 inches (also helped by replacing the Model A's 19-inch wheels with 18-inch units).

To learn more about the revolutionary elements of the 1932 Ford Model B and Model 18, continue on to the next page. 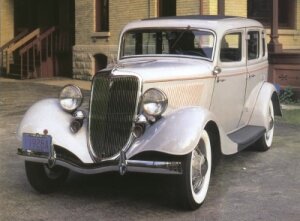